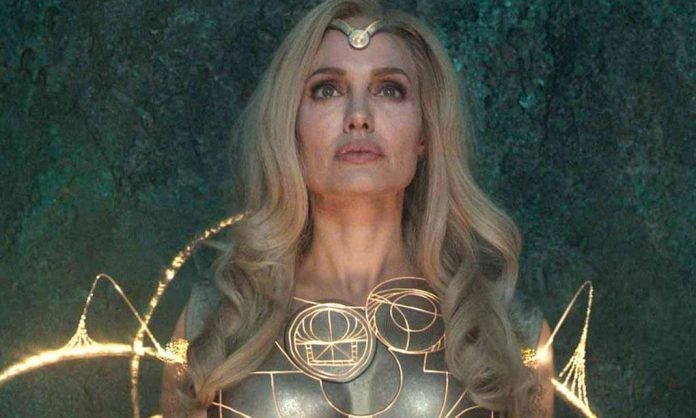 Eternals, Oscar winner Chloé Zhao’s first foray into the Marvel Cinematic Universe, has something going on. Perhaps it’s because this is one of the first MCU episodes to arrive virtually completely formed, as opposed to prior installments’ interminable teasers and character introductions.

Maybe it’s because August’s final full trailer seemed to apologize for this ahead of time, explaining that Earth’s cosmic guardians had been told not to take down mean ol’ Thanos during the Earth-shattering events of Avengers: Infinity War and Endgame because they had been told not to by some pesky unknown entity. But it’s more than likely that… wait, is that Angelina Jolie in a silver spandex wig?

Yes, Angelina Jolie plays Thena, an elite Eternal warrior capable of create any weapon out of pure cosmic energy. After all, why not?

I have yet to meet a human who is better equipped to play a beautiful, godlike alien being who has lived for more than 7,000 years (yet has not aged).

Jolie, on the other hand, is an aberration in the Marvel universe, a star so bright that she doesn’t require the strength of any corporation to propel her through the cinematic universe. Marvel doesn’t need her, though, because throughout the course of its 20-film run, it has transformed unknowns, has-beens, and fast-rising stars into A-listers.

Jolie, on the other hand, is more akin to an A-lister, so well-known that it’s difficult to tell the character apart from the actor.

She isn’t like Robert Downey Jr. in Iron Man, who is attempting to resurrect his career after falling off the radar for a few years. She’s not Glenn Close in Guardians of the Galaxy, a seasoned actor playing a semi-cameo role in a fantasy film, conscious that everyone knows who she is but content to suspend disbelief because it’s so great to see her chewing scenery like a badass in natty blue spacewear.

For the love of God, she’s Angelina Jolie! To make her disappear into a part these days, special-effects wizards would have to digitally destroy her at a subatomic level and recreate her from cherry blossom pixels.

Even so, we’d still see Jolie on the big screen.

What is her purpose in Eternals? Is it possible that we mistakenly tuned in to a DC movie trailer?

For Jolie, appearing as a mythical mer-titan in a planned Aquaman sequel or as the target of Bruce Wayne’s love in a Batman picture would make perfect sense. Nicole Kidman, after all, has done both and has a screen presence that rivals Jolie’s.

Eternals, on the other hand, is unmistakably a Marvel film, as Thanos is mentioned.

Is it possible that, despite her immense notoriety, Jolie requires the Disney-owned studio? Her performances in the high-profile Maleficent films were panned by critics, and she hasn’t had much success in more low-key dramatic fare.

If this were an episode of Entourage, the great 00s TV show about an actor attempting to make it in Hollywood, Jeremy Piven’s super-agent Ari Gold would try to get his client’s career back on track by having him star in a Marvel film. Unfortunately, this doesn’t make Jolie’s presence in the film any less strange.

She has the ability to obliterate everyone else on screen, but she has yet to do so.

This could be the most amazing stunt since Tony Stark created time travel using sticky-back plastic and an algebra textbook if Marvel can adopt Jolie and supercharge her career to the point where we think of her as one of the superhero mega-primary saga’s protagonists in a decade.