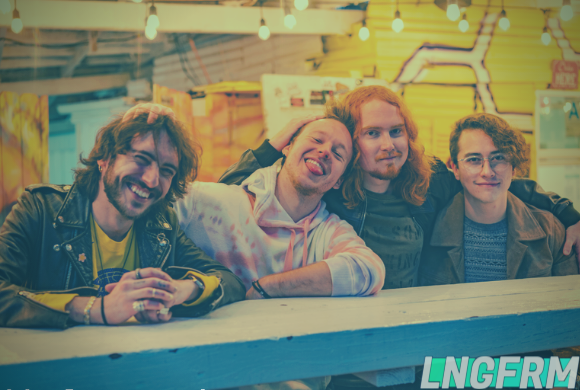 Rock band Lithic has spent the last several years combining elements of funk, psychedelia, grunge, and straight-up ear candy to create music that sets itself apart from lots of other modern-day rock offerings.

Lithic has also been strengthening their reputation by playing live shows as often as possible. Audiences have quickly come to see the group as one of the most energetic acts in the LA area today.

Founding member Juan David Peña took the time to answer some questions we had about Lithic’s unique style and plans for Lithic’s upcoming projects.

Peña is an accomplished bassist, producer, and composer in his own right. Given his extensive musical background, Peña and bandmates Marvin Buessau, Jack Dinger, and Stone Panunzio brought a huge amount of technical prowess to the modern rock formula.

This just might be why Lithic has managed to blend so many different genres into something that feels maximalist, yet cohesive at the same time.

Keep reading to learn more about Lithic’s approach to recording and live performance, as well as Peña’s crucial contributions to their music.

Do you think modern rock gives bass lots of room to breathe? Does it give you the chance to experiment?

Peña: I believe that oftentimes the bass gets lost in rock music, but at the same time I think there are people wanting to push the instrument to the limit and show how strong it can sing. I find myself blending bass-driven music like funk with rock.

I think there is something to learn from every music genre and there are no limits when it comes to experimenting with this instrument, especially within rock music.

What is the essence of Lithic? Did it take time for the group to find its identity?

Peña: What makes Lithic so special is the fact that we are all different. Everyone brings something unique to the table and the essence of Lithic is the blending of these things. I think the group found its identity pretty naturally, but as time goes by and we become closer as a group, our identity gets stronger. We embrace each other’s influences and find a way to put them together to create something we love.

How do you think Lithic’s live show evolved over time?

Peña: Every show we do is unique, and our performance continues to mature each time we play. We embrace the improvisational spirit that comes from jazz, which keeps the shows interesting.

The more we play together, the more we can play off each other’s ideas. For instance, when we begin an improvisation section, one person will make eye contact with our drummer, Marvin Buessau, and we will all know exactly what to do next.

This ability to feed off of each other allows us to come up with ideas, grooves, and rhythms on the spot, which complement the band’s performance. This would not be possible without all four members of Lithic.

So have you always had an interest in modern rock? Were you inspired by other contemporary rock acts?

Peña: I’ve been in love with rock since I was a kid. It was what made me start playing bass and it led me to discover all kinds of music. I find inspiration in every style and keep an open mind, which helps me come up with fresh ideas. I love music by Tame Impala, Royal Blood, and Highly Suspect, among many more contemporary bands. Additionally, emerging bands such as Radio Paila and Migrant Motel help keep me inspired.

Tell us more about Lithic’s discography. Are there plans to record something new in the near future?

Peña: We have released seven songs in total, which are available on streaming platforms, including our most recent singles “La La Land” and ”Light as a Feather.” We have another single coming out May 22, and an EP that will be released shortly after. Additionally, we are writing several new songs and can’t wait for everyone to hear what we have been working on.

What has the response to Lithic’s work been like? Who do you think the music appeals to the most?

Peña: The response has been beyond belief. Our latest singles have struck a new chord with our listeners and garnered us new fans. After relocating to Los Angeles, we’ve been asked to return to every venue that we’ve played.

In fact, after a gig at the Lighthouse Cafe, the general manager pulled the entire band aside to compliment our performance. Through our shows and music, we reach an eclectic audience of all ages. I really do think Lithic has something for everyone. 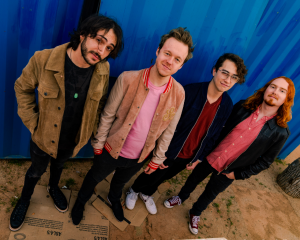 Have you and the other members of Lithic found an efficient workflow? Do you all communicate well with each other? Did it take time to get to that point?

Peña: We all love what we do which makes the workflow come naturally. It’s coming from passion and it doesn’t feel like work at all. We maintain daily contact and are good friends outside of the band.

This has helped us maintain our vision for the music. The only thing that took time was to find each other. As soon as that happened, we clicked instantly and began making music.