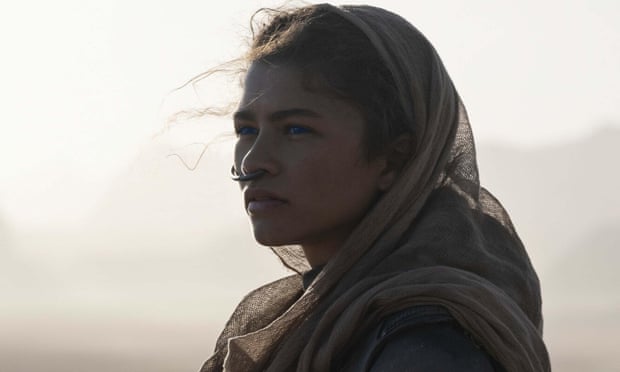 If a filmmaker can ever have a moment of victory, when the fear of influence is conquered — for a while, at least – Denis Villeneuve may have found it. This hauntingly enormous and awe-inspiring epic, a temple of interplanetary weirdness, outperforms a recognized master’s effort a generation earlier.

Dune, directed by David Lynch in 1984, was an intriguing, sleazy, and problematic film that tried to fit the whole of Frank Herbert’s famous sci-fi book into its running time — the outcome was something like to Flash Gordon without the laughter. Villeneuve, along with co-writers Jon Spaihts and Eric Roth, has used less than half of the book (with a second episode on the way) to give it room to breathe and grow: to breathe and drift through unimaginably vast reaches of fictional galaxies, with images of architecturally enormous spacecraft moving into view, or delicately lowering themselves on to alien landscapes of parched and austere beauty, particularly the ravishingly pure desert landmass of “Dune,” the Dune’s debt to Star Wars, and now Star Wars’ debt to Dune, has been widely debated (amusingly, Dune gives us moving holograms rather like the one in which Princess Leia first begged Obi-Wan Kenobi for help).

This blockbuster, on the other hand, seems more like TE Lawrence’s haughty take on The Phantom Menace. This is how it should have gone.

Dune’s narrative is set millennia in the future, in which the ruling elite lives like Renaissance Italian princes, sometimes impressing wax seals on papers with signet rings as though they had just landed by boat at Hampton Court. Paul Atreides (Timothée Chalamet) is the son and heir of the illustrious Duke Leto Atreides (Oscar Isaac), whose family has recently been ordered by the emperor to assume the lucrative governorship of the desert planet Arrakis, or “Dune.”

It is their mission to repress or pacify the planet’s indigenous inhabitants, the Fremen, in exchange for exclusive economic exploitation rights to the planet’s mineral, “Spice,” which, when properly refined, bestows superhuman mental abilities on the user (although oddly this transformation is never shown on screen). The former masters, the Harkonnen, headed by its fat baron (Stellan Skarsgrd), are angry at their expulsion, but realize that it is a political ploy by the emperor to weaken the overpowering Atreides family by assigning them to a difficult colonial assignment.

The most intimate connection Paul has is with his mother, Lady Jessica (Rebecca Ferguson), who is a member of the Bene Gesserit, a Jedi-like sorceress cult headed by the glowering Reverend Mother (Charlotte Rampling). Paul is gaining their mind-control abilities as well as strange premonition abilities.

He may be the messianic rebel leader envisioned by the beleaguered Fremen, especially Chani (Zendaya), the bold young Fremen lady with whom Paul is doomed to fall in love.

Villeneuve excels at balancing the grandiose spectacle with the close proximity of danger and a cryptic dramatic language that exalts the alienness of every texture and surface. The sound design and musical soundtrack of this picture is fascinating, maybe even more so than in his last film, Blade Runner 2049 (another daring reinvention): it throbs, grinds, and whispers through the theater.

Paul realizes that a small metal bug drifting towards him in his private room is a hunter-seeker, a remote-controlled gadget designed to murder him, in a fantastic sequence. Paul stays motionless and calm until the very last heart-stopping split-second as this sinister tiny thing with its stinging sting approaches, knowing that any abrupt movements would enable the gadget to identify his location.

The second unsettling predator to avoid in Dune is the enormous and strange sandworm that crawls under the planet’s surface and sometimes emerges to show its enormous… what? Mouth? Anus? Or a different opening, such as the tip of an elephant’s trunk.

In any case, those unfortunate enough to be near enough to see the ring of fine hairs surrounding that enormous hole of doom are in for a world of woe.

“The mystery of life isn’t a problem to solve, but a reality to experience,” one character remarks unconsciously. Dune, on the other hand, is more of an unreality, a massive other world with its own culture, civilization, rituals, physics, and chemistry. It is, without a doubt, an experience.