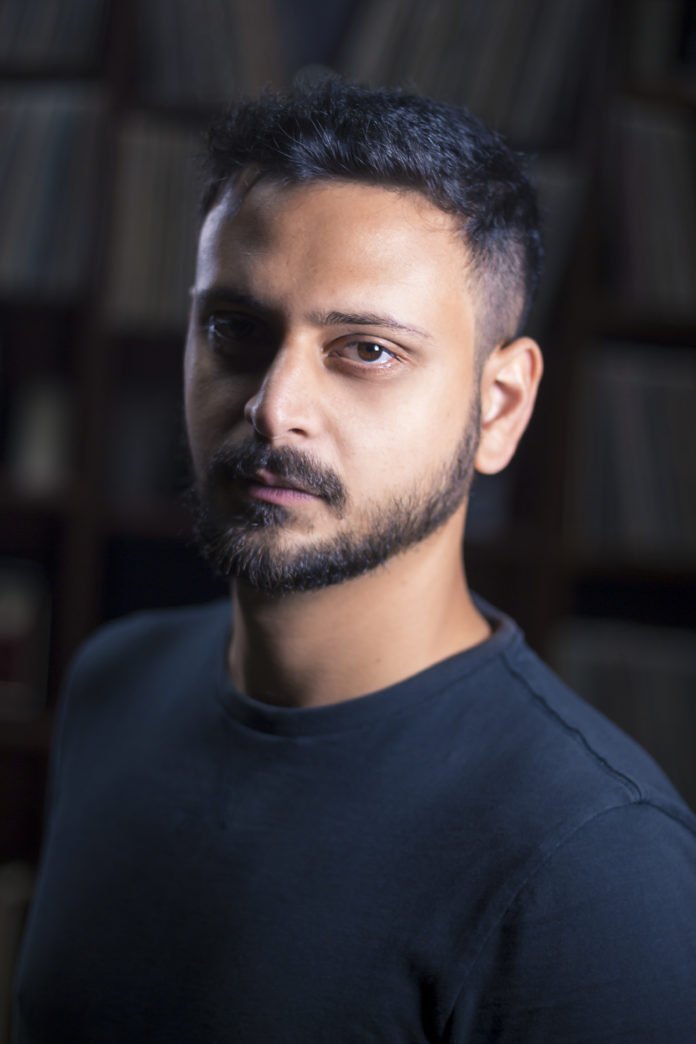 I don’t have to tell you that the guitar is one of the most versatile instruments ever created. I once had a music professor back in my college days who said, flat out, that all of the music of the 20th-century couldn’t have happened without the guitar, and more specifically the electric guitar. It’s been the backbone of almost every musical movement since the formation of jazz in the early 1900s. And one of its greatest strengths is that artists can still find ways to experiment with it, can make it express something entirely new. It speaks the language of whoever picks it up.

For Farrokh Shroff, this means taking styles of music he grew up listening to in India and combining them with the beat-centric electronic dance music of today.

Farrokh got into music thanks to the guitar, which makes sense. It’s one of the most attractive, enticing instruments imaginable, and we’ve made enough of them to the point where you can get one for relatively little money. Sure, it won’t be a Les Paul, but someone can master the instrument with even a basic version. Farrokh came from a musical family but wanted to find his own path as well.

“My father and brother both played drums and so I started as well. However it didn’t quite feel right for me. As a child I didn’t pay much attention to lyrics or vocal talent. For me it was all about the guitar riffs and distortion. The guitar solo would either make or break a song. So it was only a matter of time before I gravitated towards the instrument.”

Sixteen may seem like a late start for a highly skilled musician, but Farrokh made guitar his everything. As a result, he quickly became a pro. While still a teenager, he started teaching music theory and guitar at the Mehli Mehta Music Foundation in his native India. He was also recruited by the band Groove Gully, recording with them as well as touring the country.

“Groove Gully was the first time I got to tour around some major cities in India. Our local fan base made each and every show incredible. Collaborating with other songwriters and composers was challenging but yielded the best results because we were all focused, honest, and had the same goals.”

Nowadays Farrokh lives in L.A., working as a sound engineer and live mixer with multiple studios, including Redgate Recorders and Limitless Sky Records. He has also expanded his instrumental chops to include drums, bass, and piano, which falls right in line with his international sensibilities. After all, learning instruments has been likened to learning languages: each one you learn makes it that much easier to learn even more of them.

When I spoke with Farrokh recently at the LNGFRM offices and I already had my first question lined up: has working as an engineer and producer in L.A., the center of Western music, changed the way he listens to music? Does it help him bring a new perspective to the table, or, in this case, to the mixing board?

“As a composer I was always taught to listen to a piece of music as a whole, as well as what each individual instrument is doing. This made me double back and reconsider my writing decisions. At times being a studio engineer can include some aspect of a music producer’s job, and this experience has given me additional knowledge that influences and impacts the way I write and play music in any setting, be it performing on stage or composing in the studio.”

“There is no way to prevent your life, mood, and attitude from influencing your music. Everything you do and the people around you change your views and tastes. For example, as I get older I want to write more and more minimalist music. I strongly believe less is more. If one can convey the same mood with fewer notes, they are a better musician for it.”

On top of all that, a lot of the other ingredients Farrokh tosses in are the many musicians he’s come to love throughout his relationship with music, all of whom have helped Farrokh forge a unique musical style and taste.

“Guthrie Govan is arguably the best guitarist alive today. His fusion of rock and jazz is something I intend to explore even further as a guitarist & composer in the years to come.
Since the start of my journey as a guitarist I have steered away from rock n’ roll. These days I listen to a lot of jazz, anything from Dizzy Gillespie, Chick Corea, or my current favorite band, Snarky Puppy.”

True to form, Farrokh’s tastes are diverse, sweeping up artists from all over. And this brings us to our current societal predicament. Sure, we all say that we want to listen to different kinds of music, music from everywhere in the world, but how often do we opt for the same old stuff instead of exploring something new? Even now, in the era of digitized music, where we have access to anything we could ever think of, do we make the effort to take advantage of that access?

As someone who meshes traditional Indian rhythms with contemporary beats, I wanted to know if Farrokh thinks that mainstream listeners stay open to music from other cultures or if they just stick to the artists and genres they already enjoy.

“People are very easily distracted in this digital age. I believe that a blend of the two is the best way to hold people’s interest. For instance, having an Indian instrument in an electronic dance song has actually been done before and proved to be a commercial success.”

And with that in mind, Farrokh has continued to work to do just that: introduce more and more people to musical flavors and textures they’ve never been exposed to. And he won’t stop until he has an even wider audience than he does now, which helps to explain his jam-packed schedule for the rest of 2018.

“By October of this year I plan to release the first single off my debut album. The album takes the listener on a journey which starts at today’s most commercially accepted genre of pop-dance, through upbeat old-school funk, classical, and jazz fusion, ending in rock/djent. I composed and produced the album, but I also had the pleasure of collaborating with several different musicians, vocalists, and lyricists who brought their own flavor to my record. It is by far the most exciting musical project I have ever been a part of!”

We all know that it’s time. It’s time to open our arms and our minds, to finally branch out and do all the things we swore we would never try. It’s time to welcome more musicians like Farrokh Shroff who love music dearly and want to share it with us.