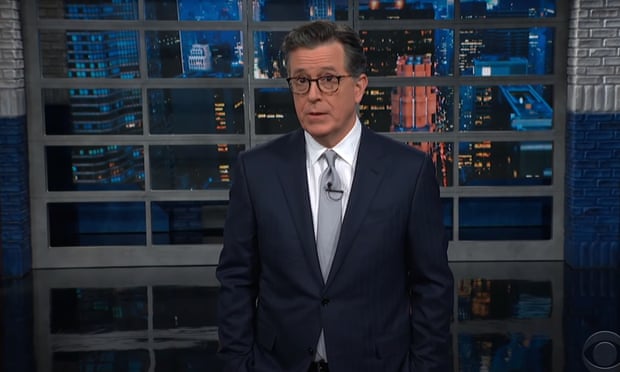 On Wednesday evening, Stephen Colbert sought to sift through the grim déjà vu of Omicron winter in New York. The Late Show presenter added, “If this pandemic were a movie, it would be Tenet.” “It’s impossible to comprehend, and all I want is for it to end, which turns out to be the start.”

“They’re trying to make us get used to all of this,” Colbert said, referring to a subtle change in public health message in recent days as the US approached record rates of Covid infections.

Those who have been vaccinated, according to Fauci, will “very likely, with some exceptions, do reasonably well.”

Colbert answered, “There are some things I don’t want to equivocate on.” “One of them is my life.” ‘Jump off the aircraft!’ you don’t want to hear a skydiving instructor exclaim. With a few exceptions, you will most likely perform quite well.'”

Seth Meyers of Late Night recapped Donald Trump’s unusual interview appearance on a major media network, the US national radio network NPR. “For some reason, Trump thought it would be a good idea to call into NPR,” Meyers added, “where he appeared to be caught off guard” when questioned by host Steve Inskeep about his 2020 election falsehoods.

Meyers remarked, “He’s a former president calling into a well-known news program, and he acts like he was just stopped on the street by Jay Leno.”

When Trump hung up on Inskeep as he probed him on his falsehoods regarding the 2020 election, the conversation came to an abrupt stop.

“You know it’s bad when Donald Trump, who will go on and on as long as you let him,” Meyers observed, “willingly ends an interview before it’s supposed to end.” “When these insane lies are given even a smidgeon of scrutiny, they crumble because they’re absurd on their face.”

Jimmy Kimmel, in Los Angeles, decried the development of “another virus”: “That big orange golfer who used to run the country.”

It was a barely disguised jab at Florida Governor Ron DeSantis, who on Fox News last weekend tripped over a question regarding his booster status.

“You know that makes Trump crazy,” Kimmel continued, since DeSantis is anticipated to vie for the Republican presidential nomination in 2024. “Trump desperately wants credit for developing the vaccines, as he should, but when he says he got the vaccine, the dummies who follow him boo him.”

“And then there are characters like DeSantis, who wants it both ways – he obviously got the booster, but he won’t admit it,” Kimmel added. “Which makes Trump, who did admit it, look like a wimp in the eyes of the gator and chewing tobacco crowd.”

Imagine being referred to as “gutless” by Captain Bone Spurs.”