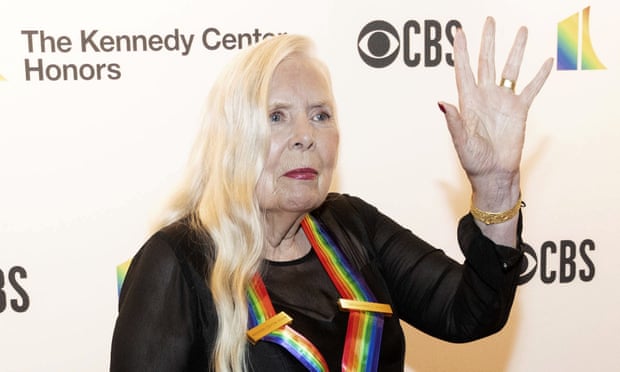 In a rare public statement, Joni Mitchell addressed her health issues as she won the Kennedy Center Honor, one of the most distinguished prizes in American culture.

Mitchell spoke on the problems she’s experienced since an aneurysm in 2015 left her briefly unable to walk or communicate at a ceremony attended by Joe Biden in a show of support for the arts after Donald Trump snubbed the awards.

“I always think that polio was a dress rehearsal for the rest of my life,” she remarked of the sickness she contracted when she was nine years old. “I’ve had to return from many situations.

And then there came the final one, which was a genuine doozy. But, you know, I’m kind of stumbling along, but I’m OK!”

“It’s a fantastic honor,” she said of receiving the prize. Enjoy yourself; I’m going to return and have a seat!”

Mitchell hasn’t released a new album since 2007’s Shine, however he has just published two volumes of an ongoing archive project.

She spoke more about her health in an interview with Cameron Crowe that was featured on the CD Joni Mitchell Archives Vol 1: The Early Years (1963-1967) and published in the Guardian.

“I’m just inching my way along,” Mitchell remarked. I’m improving slowly, but I’m making progress… Actually, the aneurysm took away a lot more [than polio]. My capacity to speak and walk was taken away.

And, you know, I regained my speech immediately, but I’m still having trouble walking. But I’m a warrior, after all. “I’m descended from Irish ancestors!”

In her acceptance speech, Midler referenced lyrics from the Talking Heads’ song Once in a Lifetime and summarized: “How did I get here? “I have absolutely no idea how I ended up here.”

She spoke about her “mediocre education,” her work ethic (“I had my nose to the grindstone… I worked like a fucking animal”), and her childhood epiphanies, including hearing Edith Piaf perform. “The idea of someone waking up in a pool of light and being completely and utterly transformed mesmerized me,” she added.

“And they had something not just to say – but something to reveal – when the light hit them.”

To receive his honor, Daz performed Beva con me from Verdi’s Otello, and Gordy stated of his singers and colleagues at Motown, “We all loved each other, and we fought.” We would constantly assert and believe that “competition breeds champions.”

And we battled tooth and nail for the greatest albums, recordings, and everything else. But we couldn’t let it stop us from falling in love. And we were all in love.”

“As someone who’s spent his entire career in comedy, when we first entered the room and people began to speak, I thought, ‘I really don’t deserve this,'” Michaels remarked in a short address. Then I realized, ‘You do, in a sense.’ Thank you kindly!”

Thanks to Ben Beaumont-Thomas at The Guardian whose reporting provided the original basis for this story.