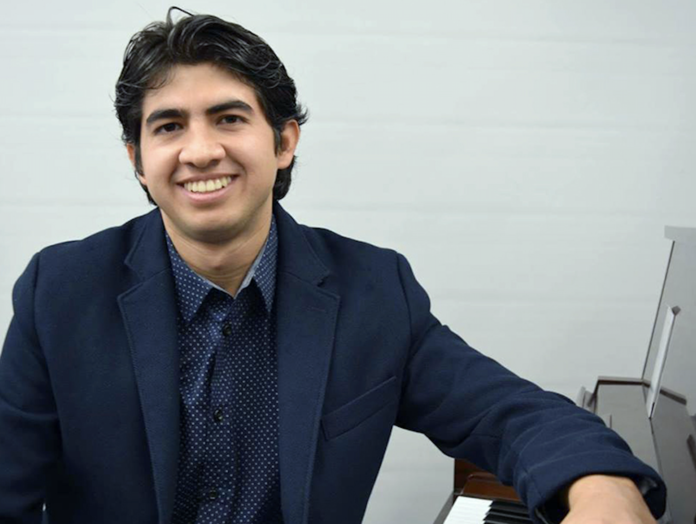 As we’ve discussed before here at LNGFRM, jazz is far from dead, and artists like Jorge Maldonado are seeing to its survival. Maldonado recently released a new latin jazz EP, ‘Inherent Roots.’ In just four short songs, it showcases captivating melodies, infectious rhythms, and dizzying instrumental skill, including some killer bass lines from Grammy-winner Esperanza Spalding.

But this is far from Maldonado’s first rodeo. He’s been exploring contemporary jazz for years, working with some of the top talents in the area, including Susana Baca and Ramon Stagnaro. But he hasn’t stopped there. He has also become a master of score composition for screen, having worked with Thomas Chase, the man behind the iconic music of shows such as ‘Dexter’s Laboratory’ and ‘The Powerpuff Girls.’

We invited Maldonado into the LNGFRM offices to have a chat about his beginnings with piano, what he enjoys most about his wide-reaching career, and where he’s able to find inspiration.

Can you tell us about your first experience playing piano as a child?

I was 12 and I had just gotten my first piano for my birthday. I had only been playing for a month when my uncle invited me to his wedding to perform with a band he had hired, assuming that I was already a prodigy. Even though It was difficult for me to give myself this title, I had been spending a good amount of time at home learning classical pieces with music books that I found as well as listening to Bach and Beethoven recordings. The piece I was assigned to perform at the wedding was ‘Oye Como Va’ by Santana. I know that doesn’t sound like a great classical piece. However, I was lucky that my interest for jazz, rock, and funk had begun a year before, so I managed to make my way through it, hitting all the right notes.

What’s been one of your most challenging projects thus far?

Writing music for ‘El Altar,’ the first episode of the latest documentary I am working on titled ‘Bucket List,’ produced by the great Roberto Ochoa. It required a good three months of intense work as I was working with a team of producers and editors remotely, and on top of that I was on the run, performing in New York, and I had a flight to Puerto Rico, where I was to give a master class. So for this reason I had to hire the musicians remotely as well. This was the first project I composed for in a team totally online, with only my laptop, studio headphones, one small midi keyboard controller, and a huge amount of faith.

How was your experience of working with Thomas Chase?

Very fulfilling. I began studying his M.I.T.A. [Musical Interval Theory Academy] orchestration course which gave me amazing TV orchestration tools that I used later on for his M.I.T.A. music libraries. It is interesting because the music required is all thematic and cinematic, meaning that I have to base many of my compositions on moods alone, imagining scenes according to categories like terror, fantasy, medieval, dramatic, suspense. I am always hoping to be in a good mood because if not I might compose something horrible, that won’t fit the mood of the piece. I also had the opportunity to perform with him at some of his shows, including Composers in the Kitchen, which features M.I.T.A. composers from different parts of the world demonstrating their gastronomical and musical traditions.

Did you enjoy the unique flavor of the Boston jazz scene?

It was a very warm flavor indeed. I was lucky enough to perform with top-chart artists at great venues and festivals like the David Friend Recital Hall, Berklee Performance Center, La Fábrica, Wally’s Jazz Café, and Summer in the City. Each city gives you a different vibe and welcoming feeling. When you combine this with the pleasure of jazz improvisation, it becomes something that you never want to leave. I actually enjoy performing in Boston more than other cities like New York or L.A. because the city is not as complicated. I will never forget performing in Boston when I was a college student at Berklee [College of Music] because that’s when I met the majority of the musicians that I still keep in contact with and perform with today.

The power of the people. There is nothing more unique than the energy that you feel on a stage when you perform. I believe that is what actually makes you play the best every time you go up there since you are receiving energy from the crowd. Music is part of what I am as a person, and knowing that that part is being admired is the best feeling in the world.

What are some valuable lessons you’ve learned since becoming a professional musician?

Learn to listen to others. I believe the ego is one of the toughest human attributes we have to deal with. But music has taught me how to control it and know that if you want to be appreciated for who you are and what you bring to this world, you have to demonstrate that you know how to appreciate others as well. This is reflected in every part of life, including music, where you have to know when it’s time to be the protagonist as well as the time to be a secondary character, listening to the others and accompanying what they have to say without interrupting. Music always has a spot for you, you just have to know when and how to use it properly.

What are the main differences of performing for screen versus composing your own work?

First of all, I believe music is not really entirely yours. Once you end up bringing that musical idea to life, it becomes independent and it is released to the universe just like radio frequencies. Thomas Chase told me something like this in one of my lessons and it was one of the most truthful concepts I have ever discovered. However, the difference will essentially come from the inspiration source. When I compose for just a musical purpose, I get inspired by events that happen in my life and by how I am feeling in the moment. When I compose for a film or documentary, those feelings are attached to how a particular scene of life makes you feel, and the life events are shared between yours and the ones shown on-screen. It is just a different feeling, but both instances give me the same amount of satisfaction.

Who are some contemporary artists who really inspire your own work?

Chick Corea, Herbie Hancock, John Pattituci, Dave Weckl, Hiromi Uehara, Arturo Sandoval, Antonio Carlos Jobim, Michel Camilo, Paco de Lucia, Alan Silvestre, Ennio Morricone and John Williams. There are many more, but these are all the main ones that I keep in mind and that will never leave my heart.