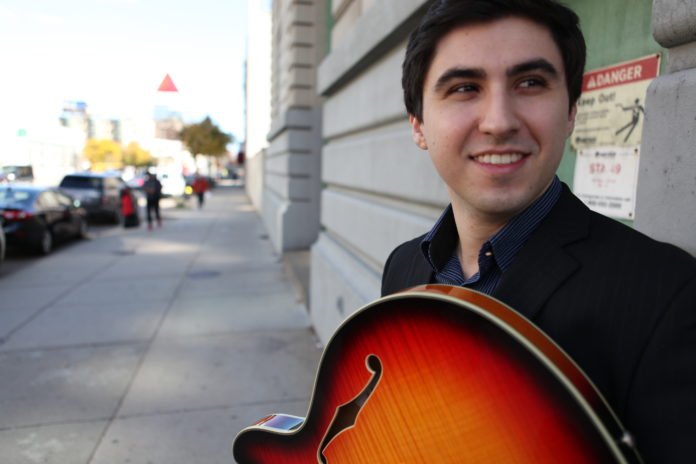 While jazz guitarists in the past haven’t been the most famous guitarists of recent musical history, they have been some of the most technically skilled and talented.

Jazz guitarists like Jim Hall, Django Reinhardt, and George Benson shaped the sound of popular jazz during their respective careers.

Renan Guzzo, originally from Porto Alegre, Brazil, has followed in the proud tradition of jazz guitar playing. But his range doesn’t stop there.

Guzzo also plays classical and rock guitar across many different musical groups, including performances at Boston’s famous Wally’s Cafe, which has hosted some of the most famous jazz acts of the last 100 years.

We had a brief discussion with Guzzo on how he found his calling and how he plans to shape these genres throughout his career.

Brazil has a long and illustrious musical history. How much of an impact did Brazil’s musical culture have on your perspective on music at an early age?

Brazilian music has always been present in my life, since an early age. I remember my mother listening to singer-songwriters like Caetano Veloso, Djavan, and Lulu Santos. There were piles of LP’s that were left out for me and my sister to pick out and put them on.

It was such an early musical influence in my life that it led me to dig up more of that style later in life. And it sort of shaped my interest in melodic lyricism plus the groove of Brazilian guitar and music in general. What do you think is one of the most important things someone can do to become skilled at playing an instrument?

I honestly think it is important to keep in mind that all the mechanical skills developed when practicing an instrument should serve musical purposes.

A few years ago I attended a Kurt Rosenwinkel masterclass where he advised us to practice only what we would play in a musical context. That blew my mind!

Of course, I have spent uncountable hours practicing scale routines and I still do, more or less. That is crucial if you want to develop some dexterity on the instrument and can have a really positive impact on someone’s playing.

However, when it comes to being a good musician, it is even more important to get yourself out of your comfort zone, whether it be playing with other musicians or recording yourself practicing in order to see what you sound like, and then figuring out ways to improve.

Those are the moments one can clearly see what needs some more work and when big breakthroughs happen.

Do you prefer to play certain genres of music over others? Why or why not?

I began to take guitar seriously as a teenager, and what caught my attention at first was some rock and heavy metal guitarists. I loved to spend hours working on those fast and tricky lines that looked so challenging yet were very expressive and inspiring.

But some players could play a different solo on a song every concert. That sounded so organic and fresh to me and I knew that was something I wanted get into.

A few years later, a friend of mine referred me to a jazz guitar teacher, and that opened up a whole new world to me. Improvisation became a major interest of mine as a musician, and building up vocabulary for that has been a constant effort to this day.

If there is something that I look for as a performer, it is to have that freedom to create a musical dialogue in the moment and let the music take us to unexpected places, whether it be playing pop, Brazilian music, jazz, or whatever genre it is. Have you noticed any trends in guitar playing in popular music that bother you?

I think the rise of Instagram has made possible a once-unthinkable number of connections. Nowadays, more and more people tend to collaborate no matter how far apart they are from each other.

That is certainly enriching and marks a watershed moment in the music industry.

On the other hand, I have seen tons of talented people sounding like exact copies of someone, and sometimes it seems to me that I am seeing the same thing being posted over and over again by different people.

It also kind of distorts some artistic values when someone posts something solely for the purpose of getting “likes.”

Other than that, it is still good that more musicians from remote areas of the world and, many times far away from any major music scene, get to exchange their experiences and have peers on the platform as a source of inspiration.

You switched from playing piano and keyboards to guitar. How should a young musician choose to play one instrument over another?

For me, that was not planned at all, and as a kid I was seeing my sister playing the guitar at home and I started to sing in class. From there, my mother decided to enroll me in some music lessons.

Since I am left-handed, it was a bit frustrating trying to play my sister’s right-handed guitar, so I asked my parents for a keyboard. Not sure if that was an inspired suggestion or just the first instrument that came to mind.

It could have been literally anything else. I did not take it that seriously, and only years later did I pick up the guitar.

I think it is just a matter of what draws your attention because at first, it should be just a fun activity and a hobby.

Some people may have a piano or a saxophone at home so they initiate playing those but that’s not common in my country so people mostly start with acoustic guitar. So it’s no wonder that it’s such a prominent aspect of our music. What are some of your favorite ways to discover new music?

Recently my main tool for finding new artists or albums has been Spotify. It allows me to have a broader knowledge of someone’s career or listen to something new with just a click.

I also have been to a few Sofar Sounds events and that’s probably the most enriching way of getting to know a new artist and meeting people. They don’t announce the line-up until the event starts, and the location is only disclosed 24 hours before the show.

It’s always a surprise! I highly recommend these shows to anyone who’s not familiar with the concept of a secret concert.

When it comes to live performances, do you enjoy seeing certain types of music more than others? Are improvisational shows more interesting or exciting?

I love the vibe of an intimate room. Jazz clubs and even home shows are usually some of the most enjoyable ones. I have been to some stadium-sized concerts and those can bring together an incredible amount of energy and be very exciting, too.

However, I usually feel a stronger connection between artist and audience in the smaller ones.

As a jazz musician and Brazilian musician, I end up going to those kinds of concerts, although it is not the genre or the fact that it’s improvised that defines my level of enjoyment, but instead the energy and the interplay onstage.

That brings about a mutual artist-audience exchange that can only happen at a live show. music being played.

Do you have any advice for any new musicians who are trying to find their own sound?

In my opinion, anything that a musician listens to or plays ends up being part of what affects their own musical vocabulary, and therefore, that person’s musical identity.

I think it is important not to stay so focused on one single influence in order not to end up sounding like a copy of that person.

Lastly, transcribing and learning parts of other instruments is an effective way of getting away from your instrument clichés and can be the key for anyone to develop a personal sound.