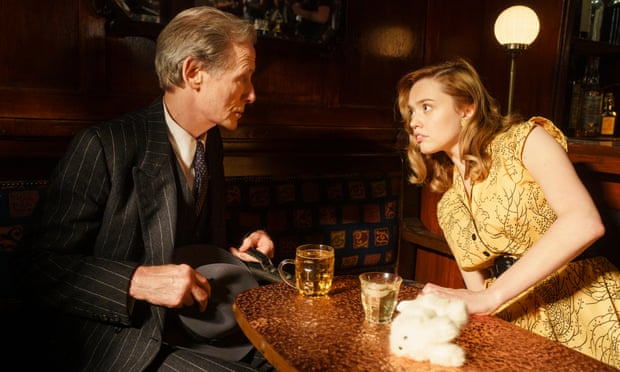 The horrible talk in the hospital consultation room – everyone’s ultimate rite of passage – is the starting point for this profoundly felt, wonderfully portrayed version of Akira Kurosawa’s 1953 film Ikiru, or To Live, from writers Kazuo Ishiguro and director Oliver Hermanus.

He is a lonely widower alienated from his greedy son and daughter-in-law, and he works in the municipal planning department without delight. Mr Watanabe, performed by Takashi Shimura, was his name in the original.

Mr Williams, as performed by Bill Nighy, is his new identity.

Mr Williams is approaching retirement, his ostensible prize for a life of futile boredom, when he is diagnosed with stomach cancer and given one year to live. He now realizes that he has been dead for some time.

After a rash and undignified attempt at boozy debauchery with a sleazy writer (Tom Burke), Mr Williams realizes there is one thing he can still accomplish: forcing the city authorities to build the modest little children’s playground that local mothers have been pleading for and that he and his colleagues have been smugly preventing with their bureaucratic inertia.

Mr Williams is anxious to have the playground finished before death closes in, and he amazes his coworkers with his very unseemly new zeal and perplexing desire to serve others.

Kurosawa’s film was set in the current day when it was released, making it a strongly contemporary piece about modern Japan and a departure from his historical dramas. Hermanus and Ishiguro chose to situate it in 1953 as well, cleverly recasting it as a historical piece about Nighy’s sad functionary role in the postwar London county government.

Shimura’s Mr Watanabe in Tokyo was bent over with the anguish of stomach cancer, in a parodic and deeper bow of Japanese respect, while he is ramrod straight in his pinstripe suit and bowler, an English gentleman through and through.

Nighy’s elegant, almost birdlike visage is given to the camera in occasional stark and enigmatic closeups, and he is heartbreakingly quiet and sensitive. This is a guy who has spent his whole life suppressing his natural wit and loving raillery in the sake of a meaningless career.

His diagnosis, as well as his platonic but nevertheless scandalous fascination with a female junior: the naively flirty Margaret (Aimee Lou Wood), has triggered his painfully wounded rebirth. Margaret enchants him, maybe mostly because she is abandoning this dreary workplace and attempting something fresh.

Meanwhile, Alex Sharp’s character, a newcomer to the company, senses Mr Williams’ agony and understands how he, too, may end himself in the same situation, out of unquestioning allegiance to the elder generation’s self-sacrificial plight.

Ishiguro has dropped Kurosawa’s mysterious, almost Capraesque monologue, as well as the local criminals that Watanabe confronts with his new, reckless bravado in the face of disease. In 1950s Britain, they could have seemed excessively Greeneian.

He’s found a sweeter, more positive interpretation of the film’s final scenes, as well as a redemptive love affair among the younger generation, but he’s kept Ikiru’s central structural coup, positioning the moment of the civil servant’s death so that we see all the besuited functionaries bickering and posturing after Mr Williams is gone, much like Ivan Ilych’s colleagues in Tolstoy’s story or the people dividing up Scrooge’s bed

I was disappointed that Ishiguro cut my favorite scene from Ikiru, when the civil servant realizes, in a flash of existential fear, that he can’t recall anything particular from his 30 years of service. It’s all faded away like a hazy, featureless dream.

But Ishiguro makes an innovative change to the children’s playground itself, with Mr Williams observing that although some children are misbehaving and tantrum-prone when their moms send them away, this is preferable than being one of those youngsters who merely wait for playtime to finish.

The playground in Living is more than just a widow’s-mite gift that the government servant gave to the town before his death. It is a symbol of everyone’s little effort at existence, with its basic little swing set and roundabout.

This is a film that has stayed with me because of its perpetual question: can’t Mr Williams’s ardent commitment be achieved without the fatal diagnosis? After all, haven’t we all been given the same prognosis?

Is it a horrible contradiction that you need to be taught something you already know but have been trying to avoid thinking about? An incredibly sorrowful picture with a sweet tone.