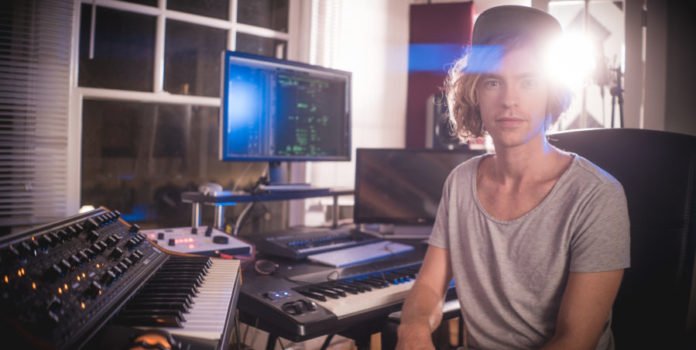 The gaming and movie/TV industries are more similar than you might think. Video games, while inherently more interactive than film, serve the same function that movies and television do — to entertain and to take us away from our daily routine, encapsulating our senses and putting us in a new time and environment for a brief period. Specifically, the use of sound helps both forms of media in achieving this transformative feat, and there is much overlap between the types of music used in film and video games. Joris Hoogsteder is one composer who has capitalized on the overlap between the two industries and consequently created a niche for himself among a sea of fiercely competitive creative minds. From writing music for NBC’s Today Show to composing full orchestra arrangements for multiplayer video games, Hoogsteder’s creations have been heard by millions across the globe and have helped take audiences to new places and times. We had the chance to ask the accomplished composer about his most interesting projects, and gain some insight into the gaming and movie/TV industries along the way.

What excites you most about your job? Is it the collaborative nature, the possibilities of music, or something else?

A lot of things excite me about working in the music and audio industry. I love how most people I get to work with and am surrounded with are very passionate about what they work on, and work at 200% to get the best out of it. Everybody that starts working in the industry is driven by their love for music, film, games, etc. I feel like people inspire one another with this, which makes for great collaborations. Whenever I work with a game developer that is just as excited about their game as I am about music, you get on the same wavelength, which I believe always serves the end result for the best. I also love how dynamic my job is; everyday brings something new to the table, whether that’s a whole new kind of project that I’ve not done before, or writing in a particular new style. It never gets old.

What led you to getting the opportunity to write music for NBC’s ‘The Today Show’? Can you describe a little bit about the process of writing music for a high profile production like that, in comparison to working on an independent project?

Writing music for the NBC Today Show was a dream come true. I’m a huge fan of this news-y traditional American fanfare style, and getting to write that kind of music for a major television broadcasting network was amazing. It was for the Royal Wedding coverage, so it had to be very ceremonial and euphoric. These kind of projects always have a very short deadline. We got the call through Moonwalk Audio, the audio company I work for, on a Thursday, asking if they could get two of these cues to record on the following Monday or Tuesday, only to be aired a couple days later. In order to get everything done in time, I kind of have to drop whatever I’m doing at the moment, and start working. Not only do these cues need to be written before the deadline, but they also need to be approved, and then all the notes and scores need to be written out for the orchestra, so they can record it nicely. It is a lot of work in a short amount of time, but it is so worth it.  On top of that, getting these tracks recorded by a professional orchestra was amazing. Nowadays, with how good the “virtual” orchestra’s (samples and synthesizers) have gotten, it’s not very common to get this opportunity! I’m very stoked with how the these cues came out. The big difference with projects like this versus indie projects, is that during indie projects, there often less moving parts, and there’s more room for experimentation, going back-and-forth, etc. For a huge project like this, you are almost required to nail it at the first try.

How does it feel knowing that thousands, or likely millions, of people have listened to music you have written while watching television?

It is a little unreal, yet so exciting! Parts of the music have been played every hour, during every bumper, and after every commercial block during the Royal Wedding weekend, so it has been exposed to a lot of people! I was so nervous when I turned on the TV!

Does the process and experience of composing/writing music for a video game like DotA2 differ from that of writing for a show or symphony?

So for DotA2, I arranged the music, and wrote a medley of all the existing music for a full orchestra and the video game Rockband Critical Hit, which is led by World of Warcraft and DotA2 composer Jason Hayes. The difference between doing a big concert show for a video game and doing “regular” music is the source material/medium, but also the target audience. Imagine, there were 20.000 hardcore fans of DotA2 in the audience, and a gazillion people watching online. Each individual watching and enjoying the show had spent probably 100 or more hours in the game. They know the music, as they experience it over and over again. Therefore, they form a strong bond with the music. When writing the music for an event like this, you’ve got to keep that in mind, respect the source material in every way you can, and make sure you make it suitable for live performance. The latter is a critical point; a big portion of the music that plays during a game is supposed to play in the background, and not distract the player too much. Often, these bits of music are quite short and are supposed to loop. Now, for a concert, having a big orchestra play short background loops would be a bit awkward, so you make sure you arrange them in a way that’s appropriate for a big show. You’ve got to bring some fire, and I’ve had the rockband play awesome shredding solos and bring all the excitement to these cues.

Given that you seem to have a large interest in applying your music toward a wide range of visual media, does the emergence of virtual reality gaming spark your interest? Additionally, do you think the increasing depth of video games has opened up for opportunities for composers like yourself?

I’m a firm believer that Virtual Reality is the next big platform. Of course, right now it is still a little niche, but so were the first computers and first video games. We’re kind of in the “pac-man” era of Virtual Reality right now, everyone is still experimenting and inventing new things every day. If we compare the development of Virtual Reality with the exponential growth that video games and technology has experienced, can you imagine what VR will be like in 10 years? or evens 20 years? It’s going to be a whole separate platform. Speaking of opportunities for composers — Yes! The video game industry is still growing rapidly, and with arrival of new platforms like these, there is more opportunities than ever! Music and sound is such a big part of every experience, and personally, I think it is very important to be aware of these new developments, adapt and improve your skill-set to work with these, and work on the edge of innovation.

Can you tell us about the Oculus-backed VR game you are working on, ‘FutureFest VR’, and what kind of hands-on work goes into getting an innovative project like FutureFest VR ready?

It is awesome! So our team recently got recognized and backed by Oculus, as we are working on a new social virtual platform for the Rift. We’re creating a festival/rave simulator where people can create and experience music and light shows together in real-time using Virtual Reality. Creating a stage for this platform, and making sure we get the audio direction right is definitely a challenge. In VR, you are basically tricking two or three of your primary senses of perception; sight, with 3D and head-tracking visuals, hearing, with the arrival of 3D and binaural simulating audio, and sometimes touch, simulated by the haptic feedback of the controllers/gamepads. As I’m working on the sound aspect, it’s my challenge to make the music and sound work realistically in the virtual environment it is being placed in. We may not always be conscious of it, but our ears are all very well trained in knowing how a sound reacts within an environment. If you find yourself in a big hangar, and your eyes perceive how big it is, there is a certain expectation of what the echoes/reflections of sounds are going to sound like. If the acoustics do not match your expectations, it’s going to feel “fake.” Of course, this is an exaggeration, but this is very critical in making these simulations realistic, meaning having sound react and feel the same as it would in a real life situation.

What characteristics or abilities do you think distinguish yourself from other composers given the sometimes brutal, subjective nature of your industry?

What helps me a lot is that I’m always very interested in familiarizing myself in all kinds of music and media. Therefore, I am able to be useful on multiple fronts of a project. For instance, on video game projects, I’m not only able to write and produce the music, but also implement it into the game, making sure the sound reaches its full potential within the game. This often helps a lot! Also, since I’ve worked on so many different kinds of projects including TV underscores for NBC, Disney, countless of video games, and a lot of theatre project, I’m able to kind of be a “musical chameleon” while retaining my sound and production style.

Which artists and various media creators have been the most interesting or idiosyncratic when collaborating over the course of your career?

I love working with YouTube personalities! I work with a couple high-profile Youtubers like singers Traci Hines and Nick Pitera, both media creators doing a lot of Disney related content. What I love about working with these musicians is their unparalleled enthusiasm for their projects; they don’t have higher-ups, or producers to answer to, and can just design their projects to their own vision. This results in cool content that a lot of people on YouTube enjoy! It’s also very interactive as thousands of people post their opinion on your work underneath these videos, which was scary at first!

Are you currently working on any other projects you would like to tell us about?

Next to composing music for all these different media, I play and co-produce for the band EMAEL in Orange County. The band has a very interesting hybrid sound, as the instrumentation consists of cello/vocals, synths, guitar, and electronic drums. We’ve just released an album Glassworks, that came out really well! We’re really proud of it. Another cool project is happening very soon! I got to be involved with the music team of the live concert of Beauty and the Beast at the Hollywood Bowl, starring Zooey Deschanel, Anthony Evans Jr., and Kelsey Grammer. It’s happening this weekend and I couldn’t be more excited to be part of the team and to see the show!