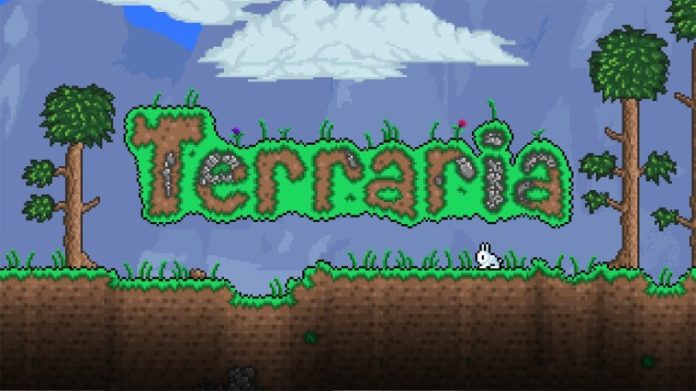 If you read my piece on Stardew Valley, you know I’m into low-key, minimal-stress gaming. And I really am. I’ve been saying it for years. And for years people have been giving me recommendations, some of which have been pretty good, some of which have been total garbage. One of the most popular recommendations has been Minecraft. Yes, good ol’ Minecraft. We all have our own opinions on that one by now, so I won’t spend anymore of this article on that famous cube-world. Instead I’ll move on to a game that has the same basic premise, same open-world feel, and a game that, honestly, is a lot nicer to be inside of.

Terraria was originally released in late 2014, 5 years after Minecraft hit the scene. Instead of 3D, it’s a 2D design with a retro, 16-bit look. There’s no tutorial, no crafting library, just a few simple tools to start with, along with a slick t-shirt/blue jeans combo. You’re left to your own devices on a quiet, grassy part of the game world with some anemic slime monsters and the Guide NPC.

What follows is a gradual  immersion in a surprisingly detailed and depthful world, an immersion that takes off at lightspeed once you discover the massive Terraria wikis online. You figure out that a huge majority of the world exists underground and that you’ll spend a lot of time digging and exploring the many caverns and spooky monsters underneath the surface. You learn about the sophisticated progression of materials and resulting tools and weapons. And if you’re like me, it will be a very happy moment when you realize that many of the bosses are completely optional; they’re not just big, ugly obstacles blocking your way to the rest of the critical path. The only constant threats are the monsters that come at night, and the Corruption, an evil patch of land slowly spreading to the rest of the planet. No big deal.

Maybe most importantly, the game stays fun. It keeps showing off its killer look, creativity, and sense of humor. All of this in a world made of movable tiles that let you build just about any structure you can dream up. The bosses are tough, which makes the kills satisfying, and the payload always makes the fight worth your time.

I’ve wasted too much of my time on games that forget to be fun, or that forget to consistently reward the player for staying in the game hour after hour, or month after month, depending on how big and elaborate you want to make your town.

So take a break, find your copy of Terraria (don’t worry, it’s pretty cheap nowadays) and start your journey. Get back to me after you’ve built your Meowmere sword.