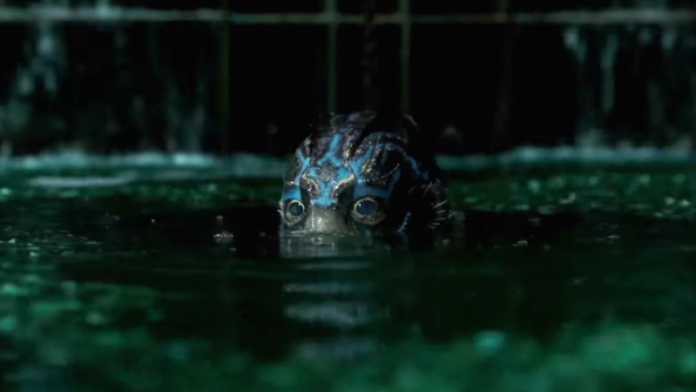 The Shape of Water, written and directed by Guillermo del Toro, moved audiences and judges this year with the powerful portrayal of a mute woman in love with a strange creature housed in a secret government facility. The genre-bending, fantasy drama co-written by Vanessa Taylor focuses on minute details of human behavior while also stepping back to observe complex, non-verbal relationships.

The Shape of Water takes place in a secret, government testing and housing facility during the Space Race, where the main character, Elisa Esposito (Sally Hawkins), is a janitor. Along with her impassioned coworker Zelda (Octavia Spencer), the two are sent to clean the room where a secret creature is being held. Over the course of the movie, Elisa develops a wordless, powerful bond with the creature threatened by Colonel Richard Strickland (Michael Shannon), tasked with understanding and exploiting the creature’s strengths for the american war effort.

The simple plot excels at highlighting non-verbal communication. Sally Hawkins portrayal of the lead, Elisa Esposito, sparks empathy as she finally connects with a creature who is also speechless. The powerful, non-verbal communication is highlighted by old-timey music composed by Alexandre Desplat. The soundtrack gives an emotional and reminiscent feel that fills the air in a film characterized by minimal dialogue.

Mystifying costume design and augmented reality make the semi-aquatic creature pop off the screen. The scaly creature feels easily believable and strangely beautiful in its texture, colors, and movement. The fantastical realism imbues a lasting bond between the creature and the audience from the moment the fish/human-like being comes on screen.

The Shape of Water is a must-see for a sensory-stimulating experience that pleases the whole way through. The film broke Academy Awards records with 18 nominations and 4 Oscar wins for Best Motion Picture, Director, Set Design, and Original Score.