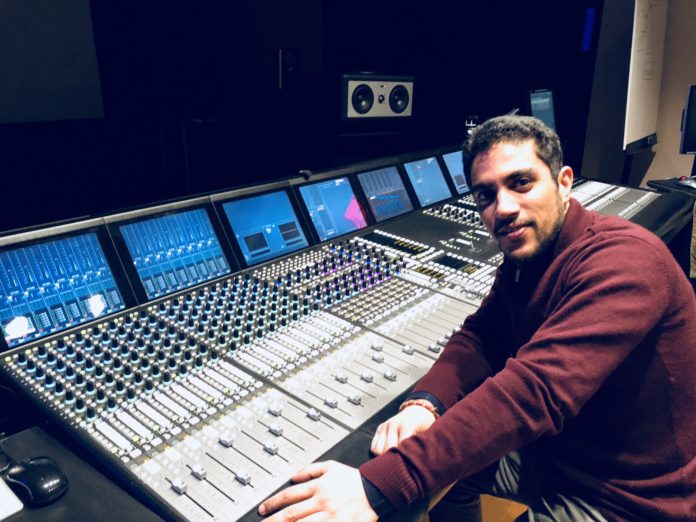 Varun Nayyar is a pretty interesting guy. He’s an audio engineer from India whose worked with a tremendous wealth of artists both here and internationally. (here being the U.S) I find his approach to composition very interesting and I’m excited to see what he’s up to next.

You’ve worked with a tremendous wealth of artists. Who have been some of your favorites to collaborate with and why?

Working with Indian Ocean and DJ Cevin Fisher have been some of my favorite projects. The Indian Ocean album ‘16/330 Khajoor Road’ gave me my first opportunity to work on a fusion album. It was a great experience. Their instrumentation, style and sound is very unique. Working with such an experienced band in the studio was an immense learning experience and enriched me with a wealth of creative knowledge. Working with Cevin was another amazing experience. Considering all the recognition he has received as an artist and the kind of work he has done, I found that his best quality was humility. His approach to being a producer and DJ taught me a great deal about producing and engineering, and also about professionalism.

Tell me a little bit about how your job might vary depending on what sort of artist you’re working with. Does the artist’s level understanding of production technology change the way that you work with them?

Musicians are above all creative thinkers and that’s what makes each composition and approach unique. As a producer, it is essential to understand what an artist wants. That could mean a lot of things—their sound, the message behind their music, how they want their audience to see them and the life force behind the music. The ability to spot and nurture these aspects of a musician’s creativity is the key to being a successful producer and engineer. The job varies depending the mindset of each artist. Music technology is the unsung instrument, the final tool to shaping and molding the creative expression and message of a song or a production. When an artist sees the value in that, they begin to think of ways on how to use that to their advantage. The level of understanding every artist has about production technology is different, and it does open new channels of creativity. These need to be thought about and considered carefully. It is always an added bonus. My job begins where the artist’s job ends, but if we collaborate on that front too it makes for an amazing experience.

How is your work different than that of some of your peers? Can you point us in the direction of some examples?

In India I was fortunate enough to have been exposed to—and allowed to study music from all over the world across many genres. I studied Indian classical music, western classical guitar, jazz, rock, pop, Balkan music, Latin music, orchestration and various contemporary styles. I have worked as a producer/engineer in India as well as the United States. The approach to music in both worlds is very different, with their own set of beautiful and definitive eccentricities. Gathering the knowledge and then collaborating my experiences of both worlds gave me an edge over some of my contemporaries in the industry. I am thankful for it and recognize the value it brings to my work. I got the opportunity to add this value and showcase my skill on some very diverse projects—as an engineer working for the Boston GuitarFest, producing the EP ‘Lioness’ with singer/songwriter Jessica LaCoy, using hybrid recording techniques for The Womps and working as a vocal producer on the album ‘V Redux’ for the band Perhaps with singer David Khoshtinat.

You’ve worked with Indian artists as well as artists from the United States and other countries. How does an artist’s background affect your approach to working with them?

Working with people from culturally and musically different backgrounds is a fascinating experience. The beauty of music is that it’s a universal language, but the approach and perspectives are always different for each artist. Collaborating with artists from a different background has been a great learning experience. Combining my ideas with that fresh perspective has always lead to a beautiful fusion of concepts. What is most important is being able to harness an artist’s creativity, while helping them preserve their uniqueness. I strive to maintain a healthy balance when helping an artist reach their true potential no matter where they come from, but it is always a treat learning about and understanding a different outlook.

Tell me a little bit about the your upcoming projects. You mentioned that you’re working on three different albums coming out in 2018.

I’ll be working with some very talented artists and producers this year. David Khoshtinat is a singer/songwriter who has performed with bands like Perhaps, who toured with the Japanese band Acid Mother’s Temple; Super Volcano and Pale Hound to name a few. I worked as the vocal producer for Dave on an album for Perhaps previously. It was a great working with him. The ideas and concepts we came up with and our collaboration on the production was a fun and interactive project where we played off each other’s strengths. After that project we decided to collaborate on an album featuring Dave’s music. I will be producing and co-writing the album with Dave.

I’ll also be working with New York based producer/engineer Derlis Chavarria on a Hip-Hop album featuring some very talented artists from the city. I had the fortune to meet and work with him while I was an intern at Premier Studios NYC, and we have built a great professional and personal relationship since. In 2017, I also worked as a producer/engineer for the band The Womps on 2 singles that were released in 2017. We’re working on collaborating on a new project very soon.

Why Is Rap Music Trash – Reasons Why