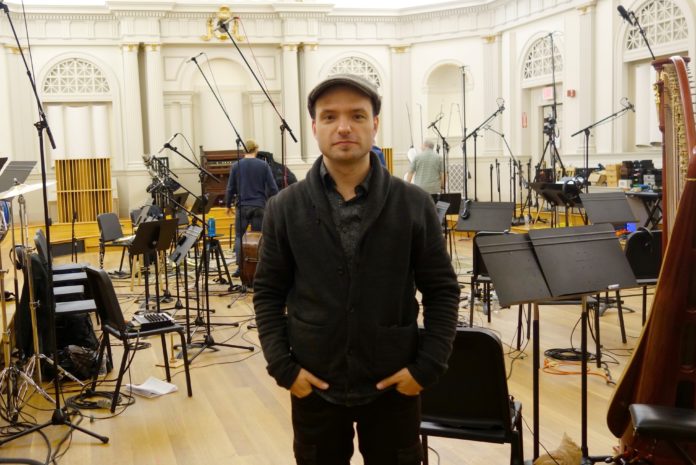 Oleg Smirnov is a revolutionary, award-winning music producer and composer, as well as the founder of IDIOM, a studio based in L.A. that has become a hub for artists from a wide range of genres and traditions. By the way, he’s a voting member of the Recording Academy. For those of you unfamiliar with the RA, that means he helps decide who wins a Grammy. He’s composed original scores for the short films ‘Ancestor’s Day’ and ‘Son CHerished Most,’ both of which have toured film festivals across the globe.

Below you’ll find our conversation with Oleg, where we discussed his influences, the challenges he’s come up against, and some tips for any young hotshot composers looking to get into the game themselves.

Who would you consider to be your biggest musical influences, either those you have collaborated with or listened to/learned from?

That is quite a tricky question for a professional composer or music producer to answer, because music is not just the field of your passion, it is also the field of your study. Thus you study a lot of different genres as an insider, a creator, and then use them as appropriate instruments in your toolkit. That being said, every composer has a unique palette of genres, styles, and influences. In my case, as a child I started with classical music and as I grew, I moved through the contemporary popular genres, and later electronic music, ethnic (world music) and jazz. In terms of more recent influences I particularly appreciate the work of contemporary crossover jazz arrangers and composers such as Vince Mendoza and Nik Bartsch. In the academic/classical camp I have lately been reviewing the work of Igor Stravinsky and the minimalists Arvo Part, Philip Glass, and Steve Reich. As for the new names, I have recently discovered Berlin-based chamber music composer Christoph Berg. I am also following the trends in film music on a routine basis and find it a very creative niche which lets you think outside the box.

When were you invited to have the prestigious honor of becoming a voting member of the Recording Academy?

I joined the Recording Academy in September of 2017. Being a voting member is an honor and responsibility. However, it seems to be a natural thing if you stay active and productive in the industry for a decade or so. To be an actual Grammy voter you must meet certain criteria in different professional areas, including the amount and the level of your published work available through the major commercial distribution channels. Personally, I found it breathtaking to watch the amount of peer talent and the effort my colleagues take while going for the Grammy Awards. I am also a voting member of the Society of Composers and Lyricists, which is a decent professional community with plenty of resources for music industry professionals.

How did it feel knowing that all of your hard work up to that point had paid off, and that you were respected in the eyes of your peers?

Well, I guess the value of peer recognition varies from person to person. For instance, some giant composers of the past like Bach, for instance, never had this luxury. Prokofieff would strive for recognition, but some others would by all means try to avoid the limelight. I remember one of my composition professors, Alla Cohen, who was the apprentice of Shostakovich has never cared much about it, but rather perceived music as the highest undertaking and practice available to humans. I believe in today’s world we tend to put too much weight on fame and superficial commercial success. Personally, I feel a big part of it is in the positive impact of your work. It brings a sense of fulfillment when something you do in life has value for others, brings positive change to someone else. I guess this is a big payoff. The other part, however, is purely aesthetic, ethical, and spiritual, and it doesn’t have much to do with the opinion of others. You just live through your work, it is the reflection of life and the source of contemplation. The latter is harder when your work is purely market-driven, but this is the reality most commercial composers for film, TV and music producers have to face. The paradox is that inside the professional community we speak a lot about individual voice, but the market dictates certain trends, and you must work with these trends to some degree to be hired.

The music you composed has been performed across the globe. What inspires you to stay creatively motivated as a composer and music producer given the exhausting nature of working in a studio with long hours?

This is a major challenge for working music professionals. Many TV and film composers I have talked to admit that they experience the decrease in spontaneous creativity and tend to leave writing out of pure inspiration. The routine reality of this job is that you almost always have a strict deadline, and you have to write to the guidelines of the film or show producers and music supervisors. Some just burn out creatively. I do not have a simple solution to this common issue. I often find escape when playing my instruments – piano, guitar, bass – just playing and experimenting. Especially with acoustic instruments you have this intimacy and unconditioned response. It brings you down to earth from the virtual studio space of digital sound. Exploring new styles and genres might be refreshing as well. Anyhow, life is the main source of inspiration and material supplier for composition. Music is a language, and you’ve got to have something to tell say if you want to be a poet.

When you were producing and composing the music for the recent award-winning short film ‘Ancestor’s Day,’ how did you approach the process of envisioning what the music should sound like?

‘Ancestor’s Day’ is an example of a film where the true and sincere artistic vision of the director and the screenwriter attracted some remarkable talent to work on the film. It’s no surprise the film has made a festival tour and received numerous festival awards across the globe from Latin America to Eastern Europe. It tells an intimate story of the deep and dramatic relationships between two women: an elderly mother and her adult daughter. For me, it was the kind of film I could easily relate to. There is a lot of psychoanalytic symbolism in it and, besides, personally, I find dramas the easiest genre to write for. I usually tend to sketch as much as I can straight after I saw the picture, relying mainly on direct emotional response. ‘Ancestor’s Day’ is quite an intricate picture and provides quite a vast scope for a composer. There are two main planes – the wild, tense and somewhat psychedelic realm of the dream, the unconsciousness, which contrasts with the superficially grey monotonous everyday reality, the consciousness. These became my main canvases and palettes. I used primarily atonal harmonic textures and harsh sound design for the dream realm and tonal, minimalist, conventional piano music language for the reality of the day. The two come together during the climax and celebrate the final theme. It’s the ultimate unification of the shadow and light, and catharsis, which illustrates the resolution of the psychological tension of the film.

After deciding on how a soundtrack or song should generally sound, like with ‘Ancestor’s Day,’ what are the next steps in the production process?

There are various scenarios of the sequence of composers’ work, which vary from project to project. Typically, after the film editing is complete and the picture has been locked, the filmmakers sit with the composer for the spotting session so that the composer has a clear understanding of the way in which the music should interplay with the picture. This audiovisual counterpoint is a very important to the impact of the film. Than the composer usually moves on to sketch the main thematic material, develops it into scene-tailored pieces or cues, and gets the approval from the filmmakers. Oftentimes a music supervisor or editor would have some temporary tracks while editing the picture – that is when a director or music supervisor would use some preexisting music composition or song as a prototype of the original film music they would like to eventually have in the scene. These temporary tracks are often given to the composer as the reference tracks and the guideline to convey a certain emotional or symbolic impact of the music in the scene. The biggest part is the music production, when the cues are properly recorded and produced in the studio. With regards to ‘Ancestor’s Day,’ there were no temporary tracks at all, so I had to construct the sound palette of the music from scratch, which is a demanding, yet very creative process.

The music and film industries are two of the most competitive in the world. Is there any advice you would give to an aspiring composer in regard to networking and creating opportunities for oneself?

Yes, it is very true that there is an overwhelming amount of music on the market. We now have a variety of accessible music production platforms. In addition, there is an overabundance of college graduates with outrageously expensive degrees in music who strive to make it in the shrinking music industry. It all starts to degarde the value of music and the competition becomes fierce. If you are thinking of a career in this field, think twice. It may not be as romantic as you might think when you have to produce industrial amounts of music to meet the restrictive demands of a music supervisor. However, if you still decide to take your chances and pursue, there are a few scenarios that I believe might lead you to become an on-demand media composer. First, you need to be extremely talented yet outgoing enough to get exposure. A rare case. Most people are average, by definition. Second, you could have strong connections in the industry, like your uncle is a big name in the industry. Then you go and get a solid and relevant education to be ready for the first big project. Third, you are as hardworking as everyone else, but also super sociable and outgoing so you network your way through the industry to get in. However, this is the character trait most composers tend not to have, thanks to the introverted nature of music composition and the production process, with long and lonely hours in your studio. And yes, you have to be lucky. The paradox is that in almost all cases you need to invest a substantial amount of effort, money and time to become a decent professional, but that itself does not guarantee your success. If you are an aspiring composer, I do suggest that you also develop a parallel professional skill set that can help land you another job you also enjoy that would back you up and keep you afloat if the composing track does not lead to immediate success. The iconic composer Philip Glass used to be a cab driver in New Your City till his mid-forties while composing on the side. Think ahead, maybe there are some more fun things do than driving a cab.