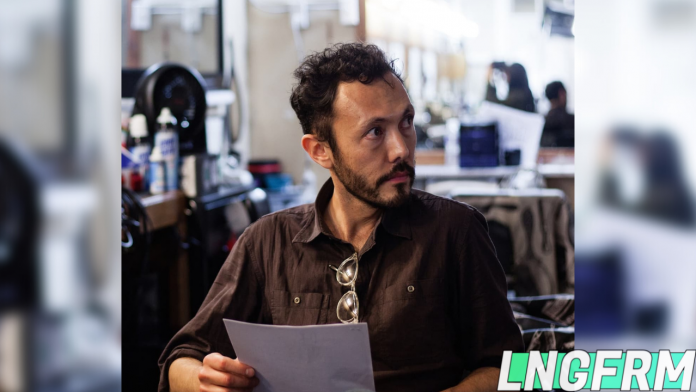 ‘El Fantasma‘ is an award-winning short film that was written and directed by filmmaker Arturo R. Jiménez. The film had its international premiere at Palm Springs International ShortFest and has also been screened at CAMERIMAGE in Poland, Oak Cliff Film Festival, and Cinefestival San Antonio, where it also won Best Texas Short.

The short is centered on the infamous Lee Harvey Oswald and his visit to Mexico City just a few weeks before the assassination of President John. F. Kennedy.

Jiménez has been working in the film industry for more than ten years, across the U.S., Mexico, Cuba, Nicaragua, and the Czech Republic, including collaborations with filmmakers and actors such as Peter Greenaway (‘The Cook, the Thief, His Wife & Her Lover’) and Matt Dillon (‘Crash’).

LNGFRM talked to Jiménez about the production and reception of ‘El Fantasma,’ sharing compelling stories and insights about the process.

The inception of ‘El Fantasma’

The story of how ‘El Fantasma’ came about is an interesting one. The basis for the story, of course, is a real historical event: Oswald’s visit to Mexico City only a short time before he assassinated President Kennedy.

Jiménez was introduced to the story via a poet friend, who shared a piece from a Mexican literary magazine that discussed how the controversial novelist, playwright, and poet Elena Garro, spotted Oswald at a party in Mexico prior to the assassination.

Right away, the film started to come together in Jiménez’s mind.

“That image seemed very cinematic: Oswald, fidgeting and uneasy at a party, surrounded by a collection of Mexican writers, communists, and sympathizers. To me, Oswald felt like a ticking time bomb, destined to be swept away by this historic incident. I was very attracted to the idea of exploring his character and personality just days before the whole world changed.”

Rather than expand that central image into a fictionalized narrative, Jiménez and his team conducted extensive research, speaking with authors, researchers, curators, and professors to get as much information as possible about Oswald’s visit. Still, the image of Oswald at the party remained essential to Jiménez’s vision of the film, and in the finished work, it’s definitely a powerful one.

“Oswald’s visit to Mexico adds another layer to his troubled past, one that includes a stint in the Marines in Japan, where he was court-martialed twice, and a failed suicide attempt in the Soviet Union. I told our film team that we needed to treat the story in ‘El Fantasma’ as Oswald’s last attempt to avoid a tragic fate: it’s as if he knew about the impending doom that was coming, and he wanted out.”

Taking on a daunting figure

It goes without saying that Lee Harvey Oswald has been the subject of public discourse and speculation for decades.

For many artists, the idea of portraying Oswald in any way is an intimidating one. His presence promises to dominate an entire work, and with the wide variety of opinions on Oswald himself and his role in the Kennedy assassination, there’s a serious risk of upsetting people.

To his credit, Jiménez wasn’t scared off by the idea, and in fact, it seems to have enticed him to delve deep into the character of Oswald.

During our conversation, Jiménez said that he didn’t want the story of the film to answer big questions about why Oswald did what he did, or even confirm that he did it. Instead, Jiménez wanted to add even more mystery to Oswald’s story and portray him as a complex character.

It’s a bold choice, and audiences continue to respond strongly to the portrayal of Oswald in the film. Jiménez even remarked that talking to members of the audience after each screening has been an exciting and stimulating part of releasing the film.

“It’s been intimidating screening this film and talking to people afterward because this part of history generates very passionate conversations and different points of view, but ultimately we want our stories to resonate, and having heated discussions about the topic after watching the film is something we’ve very much enjoyed.”

If anything, passionate responses of any kind prove that Oswald is still very much a part of our shared history, and his personal character and history continue to fascinate and challenge audiences.

But what about the performance side of things? After all, the film wouldn’t work unless that portrayal of Oswald was compelling and believable.

Esteemed actor Ellar Coltrane, who is most famous for playing the lead role of Mason in Richard Linklater’s acclaimed 12-year project ‘Boyhood,’ was tasked with inhabiting the role of Oswald in ‘El Fantasma.’

Jiménez and his team auditioned many actors for the role, but Coltrane was always the first choice.

Jiménez found Coltrane’s screen presence to be soulful and deep, that they seemed to be carrying a heavy moral conflict.

Upon meeting Coltrane, Jiménez knew that they were the perfect actor to play Oswald.

“When we first met Ellar, I wasn’t surprised that they were even more deep and passionate than I could have imagined. We formed a really nice friendship and they took the challenge of playing Oswald head-on. Ellar started writing a diary through the voice of Oswald without realizing that the real Oswald had also written extensively about his experience.”

Coltrane’s portrayal of Oswald certainly lends a sense of depth and mystery to the character, perfectly in-line with Jiménez’s vision for the film. As a result, viewers are forced to confront Oswald as a nuanced and layered person, rather than as a two-dimensional figure mentioned in history books.

As mentioned at the top, ‘El Fantasma’ has already had a successful festival run, but Jiménez is especially proud of how he’s been able to screen the film in other spaces, like museums.

Because the film is based on historical events and features a significant historical figure, Jiménez has been invited to show it outside of film festivals, and one of these showings in particular has really stuck with Jiménez.

“We recently screened the film at The Sixth Floor Museum at Dealey Plaza, which is one of Texas’ most visited historic sites. The museum chronicles the life, death, and legacy of President John F. Kennedy and it’s located in the former Texas School Book Depository building where Oswald worked during the time of his arrest.” During the writing phase, Jiménez was given access to the museum’s document collection to aid in research. Screening the finished film at the museum felt like a natural and fitting way to give back to The Sixth Floor Museum.

In this way, ‘El Fantasma’ could become something more than just a film, offering a uniquely dramatized look into the life of a troubled and highly controversial historical figure who changed the course of world events.

‘El Fantasma’ feels like an evolution of Jiménez’s film work, which includes a mixture of narrative and documentary filmmaking.

Jiménez does seem drawn to complex figures and events that are part of our shared history, especially those that have created lasting effects.

In addition to the historical component of much of his work, Jiménez finds great value in working on projects that bring together filmmakers and artists from different countries, as this offers more perspectives on the work at hand.

to stories set in very specific times, mostly in the past, that echo all the way to the contemporary

world. I’ve also enjoyed working on international co-productions, both in documentaries and narrative films, and ‘El Fantasma’ gave us the opportunity to build a bridge between the film communities in Austin, Texas and Mexico City.”

Will this highly collaborative approach to filmmaking become the new norm in an age of remote work and virtual conferencing? It’s definitely possible, and if we look at ‘El Fantasma’ as a precursor to that possible future, then it seems we’re bound to see some very interesting film work from Jiménez and others in the years to come.

But in the meantime, ‘El Fantasma’ provides a truly captivating window into a major turning point in the history of the United States and the world at large.

If you’d like to learn more, please visit the film’s IMDb page here.