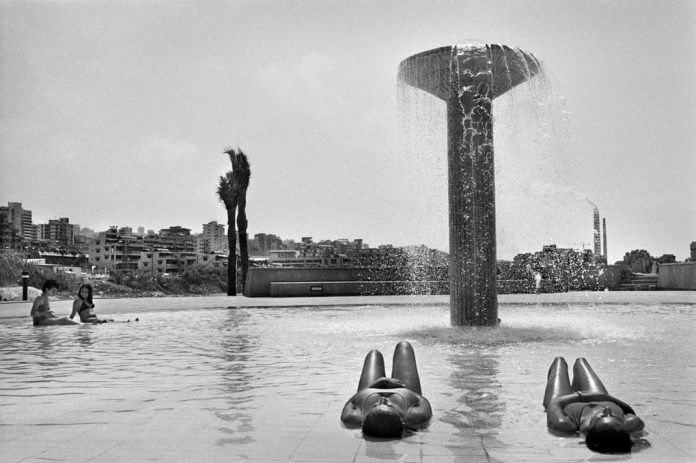 Fouad Elkoury was sitting in his Beirut house on August 4, 2020, when a massive explosion at the harbor smashed his windows and slammed through his living room. The Lebanese photographer somehow escaped, but his house, along with the homes of an estimated 300,000 people, was devastated.

“First, your memory vanishes when you go through such an explosion,” he explains. Second, your hearing has been compromised. Finally, you stop making plans. You realize you are nothing when everything is so vast. “This is where I am right now.”

Elkoury, one of Lebanon’s most well-known photographers, gained worldwide acclaim for his personal images portraying life in Beirut during the Lebanese civil war in the 1970s and early 1980s. He found himself onboard the ship transporting Yasser Arafat during the 1982 Israeli assault of Lebanon while traveling in the years after the war.

Atlantis, a nautical sequence of photographs starring the Palestinian leader, was made by him.

Elkoury’s photographs often combine the personal and the political, resulting in photos that infuse commonplace settings with the weighty resonance of their sometimes horrific history. They include Portemilio, Lebanon, 1984, a black-and-white photograph shows sunbathers relaxing by a fountain in a tourist resort north of Beirut, while the year the photograph was shot serves as a reminder that violence was raging only a few kilometers away.

Two well-dressed guys look imposingly into the lens in Changing the Wheel as their driver changes a tyre. It’s not simply a microcosm of social strata; the blasted-out shells of Beirut high buildings can be seen in the backdrop. Even in the midst of turmoil, life and its rituals carry on, as Elkoury demonstrates.

We’re conversing over the phone because Elkoury has spent the last year at his family’s “mountain house” in the countryside, where power and internet are spotty. Despite having spent most of his life on the road, having first arrived in London as a young man to study architecture, he has settled down in the last two years, with his work gaining a new audience online, primarily via the prominent Instagram account Middle East Archive.

MEA, which was founded by Romaisa Baddar and reposts historical photos of the area, has recently launched its first photographic book, which includes Elkoury’s photographs from 1980 to 1997 taken in Oman, Palestine, Egypt, and Lebanon.

“When Romaisa approached me, I told her I wasn’t feeling well,” Elkoury adds. “I couldn’t do anything for two months after the explosion because I was so traumatized.” I’d rather be alone and think for myself than go around Instagram looking at photographs of food.” Baddar persevered, and Elkoury eventually gave up.

The result is an intriguing collection of Elkoury’s less-known, upbeat work, ranging from a horse rider in the middle of a busy road talking to someone through a car window (Jerusalem, 1993) to a man in a coat leaping wildly in an attempt to stop a kid from scoring a goal during an impromptu football match (Jerusalem, 1993). (Gaza, 1994).

Elkoury’s book, also titled Middle East Archive, is full of this calm beauty of ordinary life: regardless of geopolitical background, kids still play football, he says. Is it the match’s winning ball? We’ll never know for sure.

According to Baddar, the book is meant to provide a counterpoint to popular representations of the Middle East. “The Arab world has been framed primarily through suffering,” she continues, “when that is not all that these places stand for.”

“I want to show the region in all of its glory, and Instagram is where I and a lot of people my age get our news,” she says. As a result, it seemed vital to show something considerably more cheerful than what you’d see if you simply Googled the Middle East.”

Elkoury, on the other hand, does not consider his work to be just journalistic documentation. “If all my images do is show the event happening in front of me,” he adds, “the meaning of it will fade away when the event fades away.” My photographs have to be more significant in order to be saved throughout time.”

Elkoury began photographing using a camera he stole from his father’s desk drawer when he was six years old, but he followed a tortuous road to professional photography, first working as an architect. However, when he returned to Beirut in 1979, the civil war was in full swing, and he started shooting his surroundings once again.

“There was nothing else to do but take pictures while the war was raging,” he recalls. “I was afraid of the conflict, so instead of going to the frontlines, I focused on what life was like during the war.”

This emphasis on the individual in the midst of great change is a frequent topic in his work, most notably in his 2006 series On War and Love. Text is placed right on top of his photographs of unmade beds, bathroom mirrors, and sunny walls, resulting in an unusual juxtaposition of a diaristic depiction of a breakup with the continuing strife in Beirut.

The customary dramatic representations of battle, like his girlfriend, are missing from the photographs.

That series was included in Lebanon’s inaugural pavilion at the 2007 Venice Biennale, where Elkoury presented a new series with works by Lebanese-American poet and artist Etel Adnan earlier this year. “I’m continually astounded that respectable museums want to exhibit and buy my work,” Elkoury adds.

“I take pictures of where I live and what I see and feel, and that’s all there is to it.”

Elkoury has immersed himself in the areas he has chosen to capture in his pursuit for genuineness. “When I travel to a country, I usually stay for a while – in Palestine, I stayed for two and a half years.”

I don’t go on a five-day trip. I remain, rent a home or apartment, and gradually get to know the city’s culture and mindset. Immersing oneself in a nation is fascinating. However, it is a risky decision since you often end yourself in places you are unfamiliar with.” He takes a breather.

“I can’t believe I’m still alive.” Just by being in areas I shouldn’t have been in, I might have perished six or seven times.”

Elkoury uses cinema as his medium of choice. There is now a stack of rolls ready to be transported to town and developed. The photographs they include are part of a treatment he undertook following that fatal incident last year.

The treks he’s been doing through the mountains surrounding him are documented on those rolls. Taking these photos — returning to his art – has improved his recuperation. “Nature appears to be the only solace,” he adds. “It gives you eternity.”

Thanks to Ammar Kalia at The Guardian whose reporting provided the original basis for this story.