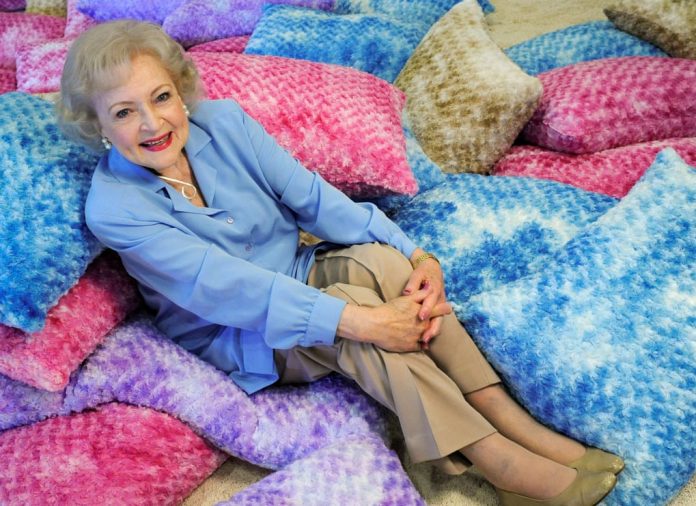 Betty White, who had one of the longest careers in television history as a sassy blonde, was also one of Hollywood’s hardest and wisest brunettes. Her ability to shape her public image – via talk programs, gameshows, sitcoms, and various autobiographies – was such that she was recognized as more than a simple TV personality from the start: a true type.

Many people looked forward to her in her final years as the perfect example of how to age gracefully. “I asked her what she was going to do after the show,” Amy Poehler writes in her book Yes, Please, about White’s appearance on Saturday Night Live in 2010.

She responded, ‘I’m going to make myself a vodka on the rocks and eat a cold hotdog.’ Poehler adds, “It confirmed for me that growing old was awesome.”

White had spent over 70 years ingeniously transforming herself into a recognizable genus by that time. When The Mary Tyler Moore Show was at its peak in 1973, an episode was written starring a new character, Sue Ann, who was characterized in the script as “a sickeningly sweet Betty White type,” as White remembers in Here We Go Again, one of her autobiographies.

As a result, White was cast in the role of Sue Ann Nivens, the apparently dopey blonde with a not-so-hidden nasty and nymphomaniac streak. White was so good in the part that she became a regular on the program and won her second and third Emmys for it.

Looking back on White’s career is like taking a Zelig-like journey through the history of American television, as she appears in each of the medium’s most essential genres throughout the decades. (At gatherings, her loving third, last, and late husband, TV gameshow presenter Allen Ludden, would say, “Meet my wife – one of the pioneers in silent television.”) She nodded, “And it was practically true.”

White, who was born in Illinois but raised in Los Angeles, received her first TV job in 1949 as Al Jarvis’ sidekick on his live variety program, Hollywood on Television, where she and Jarvis would converse amiably in between playing new songs. However, television viewers complained that they were more interested in White and Jarvis’s banter than the records, prompting the music to be dropped.

Her engaging personality ensured she was there in the early days of gameshows and talkshows, and she worked with everyone from Jack Paar to Johnny Carson throughout the 1950s and 1960s. In her frequent appearances on her husband’s game show, Password, which Ludden helmed from 1961 to 1967, fans got to witness her profoundly in love.

When the couple returned on the program soon after their honeymoon, they couldn’t stop grinning and calling each other by their first names. “What kind of honeymoon did you two have?” inquired Paar, a friend of the couple and another guest on the program, bemused.

White was a renowned passionate lover of animals and wrote about her lengthy work with zoos and conservation in another book, Betty and Friends: My Life at the Zoo. They never had children, however White was stepmother to Ludden’s children from a previous relationship.

She turned down a part in the popular 1997 film As Good as It Gets because one of the characters tossed a dog down a laundry chute in one of the scenes. “I said I wouldn’t do it as long as that scene was in the movie,” she said. She didn’t do it.

Her two hallmark performances brilliantly exploited this contrast – the sweetness atop the sting – She rose to prominence in sitcoms throughout the 1970s and 1980s, possibly the two most important decades in the genre’s history. Sue Ann Nivens satirized her own twinkly eyed performance on The Mary Tyler Moore Show, throwing the most cutting of punches at Moore while wafting about clutching a souffle.

They were all “comedy black belts,” as one TV reviewer put it, but few episodes showcased White’s knack for humor more than Rose: her timing, rhythms, and even facial expressions transformed Rose from a possibly one-joke pony into a three-dimensional figure, particularly appreciated by youngsters. “It used to amuse me anytime a young child, pulling on mother’s sleeve, would point and exclaim, ‘There’s Wose!’ “They knew the character despite not being able to pronounce it,” White recounted.

A look at The Golden Girls’ records disproves any claims that fans don’t want to see elderly folks on TV. For the first five years, the program was among the top ten most-watched shows in the United States every week. Every year throughout those years, all four stars were nominated for Emmys.

While it seemed to be a basic comedy with a laugh track, the program was astoundingly brave about everything from elderly sex to death in a manner that no other show had been before, and it was adored by people of all ages. “I think we were just truly funny,” White said simply and rightly, summarizing the show’s popularity.

It may be said that everyone who works in the entertainment industry for a long time becomes a legend and a treasure. But, as a cursory survey at the numerous lost TV legends of the past demonstrates, this is simply not true (when Mary Tyler Moore died in 2016 many were surprised she was even still around).

White’s durability is undeniable; she was 93 years old when her latest comedy, Hot in Cleveland, concluded.

But she was more than just a product of wonderful genes. She was a true trouper in the sense that she was willing to go along with anything for the sake of the joke, whether it was tap dancing (brilliantly) in shorts on The Golden Girls in her 60s or making jokes about her “salty muffin” on Saturday Night Live in her 90s.

She was a workaholic, and her love of work was part of the reason her second marriage failed after two years in 1949, and it was also how she got through the pain when Ludden died in 1981. She was, however, an early follower of the notion of celebrity: she saw the importance of making her personality her brand before many others, and the question of how near it was to reality became irrelevant.

With her skill, reality was a non-issue.

Thanks to Hadley Freeman at The Guardian whose reporting provided the original basis for this story.