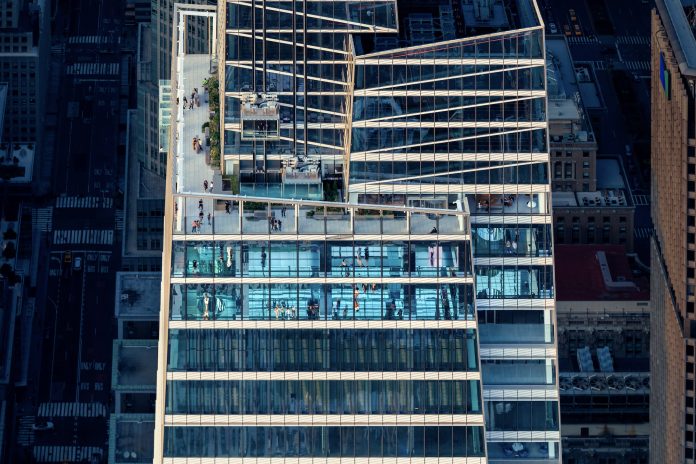 Creative Producer and filmmaker Casilda García López brings a unique artistic perspective to every one of her projects, and those projects have spanned documentary filmmaking, fashion photography shoots, and short films for brands and individuals, such as mcq and painter Adam Himebauch.

Originally from Spain, García López’s career has taken her all around Europe and the US, but for more than four years now, she has been living and working in New York, and the Big Apple is very much at the center of SUMMIT.

SUMMIT is a remarkable immersive art observatory located at One Vanderbilt, New York’s newest skyscraper, and García López was instrumental in helping bring this vision to life.

LNGFRM had the chance to interview García López about her work on the SUMMIT campaign, and as you’ll soon see, it has been a monumental undertaking.

But the results speak for themselves, and if you happen to find yourself in downtown New York between now and June of this year, do yourself a favor and check it out in person. You won’t be disappointed.

Thanks for joining us today. We’d like to hear more about your work on the creative campaign for SUMMIT One Vanderbilt. How did you first get involved with the campaign?

García López: I was introduced to the campaign’s Executive Producer Kris Lindblade by veteran Producer Deanna Nolasco. She’s incredibly talented and has been leading productions in NYC for over ten years.

We had previously worked together under the J-Walk Agency for the Shiseido brand and their cosmetic line, Bareminerals. Kris has successfully put together stunning campaigns like the Vogue September issue, featuring the world’s leading models, including Bella Hadid and Anok Yai. Working with good people is more than getting good jobs. You feel respected, you learn, and you have fun!

From the outset, what were some of the key goals of this campaign?

García López: The main goal is to share KENZO Digital’s creative vision in communion with New York and the brand-new skyscraper, One Vanderbilt, to make sure that when people think of New York, they also think of SUMMIT. We’re always making the public, both locally and globally, the stars of the show.

What are some of the aspects of this campaign that you’ve been working on personally?

García López: A big part of it was growing familiar with Tier A and Tier B budgets and what each one can grant you. I was responsible for recruiting team members, reaching out to creatives, and picking the best fit for each shoot, casting models, coordinating travel across LA and NY for shoots, arranging internal and client-facing meetings, and maintaining the project timeline.

Would you say that this is the largest campaign that you’ve worked on so far?

García López: Without a doubt. I joined in November 2021 and will end the project in June of 2022. It has been the longest-term project I’ve ever been involved with. When you start working on set as an assistant, you just show up.

Many times you don’t understand why things develop the way they do during the shooting days. It’s rare to get insight into all the stages of a commercial campaign. Working in this Creative Launch campaign has been an unmatched learning experience.

Has your experience of living in New York informed this project in any way?

García López: In order to convey what Summit can evoke, you need to understand New York City. Having lived in NY for nearly four years in four different neighborhoods helps me understand the different kinds of New Yorkers and how they could be inspired by the installation.

In the same way, being from Spain and having lived in Paris and California as well has helped me understand what a global audience of tourists would be looking for when visiting NY and how SUMMIT could make their trip come full circle.

In the same vein, has your previous work in documentary filmmaking given you special insights into your production work for SUMMIT?

García López: As I said earlier, SUMMIT’s goal is to best communicate the story of New York through an intrinsic art installation. Documentary filmmaking has helped me understand how they both come together. The skyline and SUMMIT are one. KENZO Digital’s piece is an extension of the City, and the infinity mirrors also make you become a part of it. What’s one of the biggest takeaways from your work on this campaign?

García López: Getting to meet and learn with a team of incredibly hardworking professionals where the only answer to a problem is finding a solution. Converging with creators I’ve admired for years and the installation itself.

SUMMIT is a meditative space. Every time I visit SUMMIT it’s a different experience shaped by the weather. I feel like I’m contemplating the world from the sky and it shifts my perspective on my daily struggles.