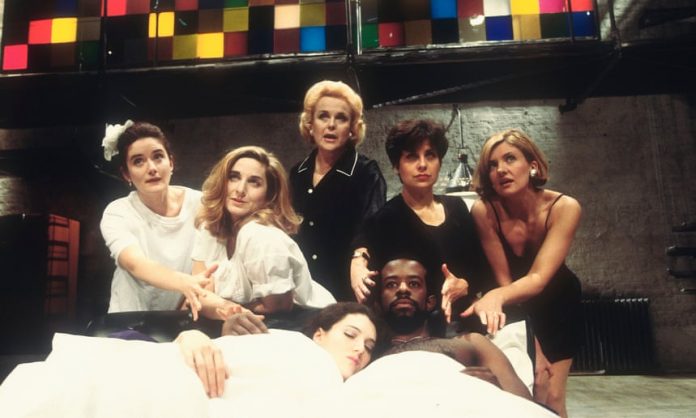 In his guest bathroom, he maintained a variety of grooming tools such as nail scissors, nose hair trimmers, and the like. He walked with a shambolic attitude and a listing stride, as if he were a grad student pretending to be an adult, or as if his nanny had combed his hair for him that morning.

When he spoke, he would rock his head back and frequently speak with his eyes closed, as if communing with a higher force, which he most likely was. His most recent passions were always close to the surface — hearing him talk about Rory Kinnear’s Hamlet, for example, made one want to go see it all over again (he actually flew a group of his New York friends to London to see the production). He was as outspoken in his criticism of work he didn’t like. He was fiery, opinionated, unapproachable, and as sharp as a razor.

He was all New York until his latter years, when he elected to spend more time in Connecticut. Steve saw everything, and he told me how to figure out how long it would take me to walk to each theater by counting how many blocks east to west (five minutes each block) and north to south there were (two minutes).

Steve’s existence on East 49th Street was a fantasy of New York in the twentieth century for this particular wide-eyed Brit. A lovely brownstone with wood-paneled walls and framed word games and puzzles. The view from a grand piano was of a walled garden with vines and flowers.

Katharine Hepburn was the next-door neighbor. He shared a tale of strolling out into the garden at twilight, turning around, and finding Hepburn standing in the illuminated window when he first acquired the property. Spencer Tracy emerged from the shadows behind her, threw his arms around her, and closed the drapes.

Years later, following the off-Broadway premiere of his musical Assassins, Hepburn approached him cautiously and shakily over the garden wall to offer her opinion. “Mr Sondheim, you’re a curious man,” she observed. He certainly was.

His emotions became more visible as he grew older, which was odd for someone who was often criticized for his lack of warmth in his work. I once had dinner with him alone on 49th Street, during which he told me about Giorgio Strehler’s epic staging of The Tempest.

He broke down in tears and went to the restroom as he spoke about the closing minutes and Prospero recognizing that his powers were gone.

When he was on your side, he was a fantastic partner. When he wasn’t having fun, I saw him walk out of a Chichester performance of A Little Night Music in a rage. And I was working at the National Theatre when he first saw Stephen Pimlott’s (in my view) great production of Sunday in the Park With George – and by 10 a.m. the following morning, the whole building knew what he thought of the second act.

It was exciting to be on the receiving end of his appreciation, which I experienced with both Assassins and Company at the Donmar. He’d weep (tears were never far away), select his favorite moments, notice every detail, and wax poetic.

He was constantly eager to hear different perspectives on his work. Indeed, he encouraged them – and in doing so, he broke the American musical theatre’s traditional mold, which tended to decree that the original production was the right and only one, and that the work was then calcified for all eternity by draconian rules imposed by author’s estates and entertainment lawyers. Art, especially theatrical art, he felt, had to be a living, developing entity or it was nothing.

In that respect, he was the polar antithesis of Arthur Laurents, with whom he co-wrote West Side Story and Gypsy. Laurents was literal, strict, and lacked Steve’s faith in the work’s ability to withstand numerous readings.

Consider the incredible variety of Sweeney Todd productions, as contrasted to the one stale production of West Side Story that toured for decades — a condition that was only recently rectified following Laurents’ death by fresh versions from Ivo Van Hove and now Steven Spielberg.

As I write this, there is evidence of Steve’s unbounded excitement for new adaptations of his work in New York – John Doyle’s production of Assassins and Marianne Elliott’s of Company, both brand new and as fresh as the day they were originally performed.

His legacy is undeniable — and best described by others. Not just the performances, but also his two astonishing novels, which he wrote when he was mostly out of gas for the stage. They’re unique and important because they explain creation from the inside out.

They are necessary reading for anybody who wants to comprehend what theatre may be at its best level, as well as for those who must now strive to stand on his shoulders.

The high points of the shows remain personal: Company’s Sorry-Grateful, A Little Night Music’s Every Day a Little Death, Sunday in the Park’s Sunday, and pretty much the whole Sweeney Todd. There are a few memories that are unique to me, for which I am ridiculously fortunate and foolishly thankful.

Here’s an example: we were working on the ill-fated New York Theatre Workshop production of his final musical, Wise Guys, at the time. Steve had brought a new song, A Little House for Mama, to rehearsals that morning. I found myself crying as our musical director Ted Sperling sat at the piano, performing the song for the first time in his beautiful falsetto, while the afternoon light flooded into the dusty old practice room.

The song was easy and simple, but it seemed to speak to the hearts of individuals who, like Steve, had worked for a lifetime to restore a relationship that will never be fixed. I turned around to see him weeping as well. He said, “Mothers.”

Thanks to Sam Mendes at The Guardian whose reporting provided the original basis for this story.