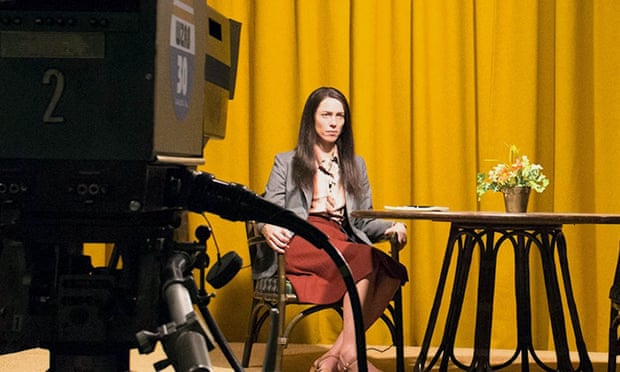 It’s easy to believe Rebecca Hall has never had to struggle for anything in her life. She made her cinematic debut at the age of ten in The Camomile Lawn, a 1992 TV series directed by her father, Sir Peter Hall, a British theatrical legend.

A decade later, she made her theatrical debut in his production of Mrs Warren’s Profession. Following that, he went on to have a 15-year acting career, working with Steven Spielberg (The BFG), Christopher Nolan (The Prestige), Woody Allen (Vicky Cristina Barcelona), and many more. But she’s been battling for more than a decade to establish a second career as the director of a film that some argue she has no right to create.

That film is Passing, which Hall adapted herself from Nella Larsen’s 1929 book about the Harlem Renaissance. It’s an emotionally compelling look at racial identity through the viewpoint of two Black women, Irene (Tessa Thompson) and Clare (Ruth Negga), who both “pass” as white to differing degrees.

“I was sat there reading and I could just suddenly start seeing it: their two faces, seeing each other in that tea room, and I had that idea of looking from Irene’s perspective and panning through someone staring at you and then coming back,” Hall says of her first encounter with the book in her early 20s. That was there in black and white in my thoughts, and it was really powerful.”

In many respects, the concept of “passing” is historically distinctive. It only made sense in a time and place when the oppression and segregation of American “negroes” (defined as anyone with any African ancestry according to the “one-drop rule”) coincided with the dismantling of community ties, allowing and encouraging people of European appearance to “cross the color line” into white society.

However, what Larsen’s book reveals – and what Hall’s film elucidates much more – is the universality of the passing experience. Nobody fits perfectly into the identification categories that society has allocated to them; every person is more complicated than any label can account for.

Take, for example, Hall, who has a personal connection to Larsen’s story that isn’t immediately clear. Maria Ewing, an opera singer, was born in a white, working-class Detroit neighborhood in 1950 to a white mother and a father of mixed African and European ancestry who often “passed.” Growing up, Hall was dimly aware of his family’s history, but none of it was spoken publicly.

Hall is now a mother as well. She met Morgan Spector, a Broadway performer, while they both starred in the play Machinal.

They married in 2015 and now have a three-year-old daughter who “loves the television,” according to her. Parenthood has provided her with a new perspective on her often unusual upbringing: She admits, “I didn’t always have the best childcare.”

“I was often left alone, but I had access to drawers of VHS tapes of old Hollywood films that my mother enjoyed.” She recalls seeing Imitation of Life, a 1959 movie about death directed by Douglas Sirk, with her mother. “But wait a minute!” I recalled thinking.

This is a narrative that is a little bit about you! So it’s strange that we’re sitting here watching this and not saying anything about it…”

So far, Covid has kept mother and daughter from watching Passing together. “She watched it on her laptop, which was not ideal from my perspective,” Hall explains. “But then she called me, and she was ecstatic and proud.”

Hall is visibly moved as he recounts the discussion. “She described it as a huge release for her father – of what he couldn’t say – and, in turn, for her, and that it was like receiving a late-in-life gift,” she added.

Passing delves into history, race, class, and gender via the little but revealing elements of women’s home life in early twentieth-century Harlem. Irene lives in a pleasant, seemingly satisfied domesticity with her two boys and her doctor husband (Moonlight’s André Holland), who is attended to by Zulena, a darker-skinned Black maid (Ashley Ware Jenkins). That is, until Clare, an exuberant blond bombshell with explosive potential, shows up in the shape of an old childhood acquaintance.

The film is filmed in black and white, with the monochromatic palette masking minor skin tonal variances. This, according to Hall, is crucial to how Passing demonstrates the subjective, socially constructed character of race: “I think I probably only intellectually understood why it had to be black and white after the fact.” It seemed like an intuitive conclusion at first.”

Her casting choices were similarly daring. Every prior Hollywood picture on the subject has put a white actor in the passing part, with the exception of John M Stahl’s original 1934 production of Imitation of Life, which starred mixed-heritage Fredi Washington as Peola. “Those films are white-gaze-y in the sense that they center the white experience of receiving someone passing, like, ‘Oh yeah, they look white…’ and I really didn’t want to do that,” Hall explains.

Thompson and Negga were cast as “women who people broadly understand to be Black women, or biracial,” which not only corrected cinema’s history of whitewashing, but also served a dramatic purpose: “It puts the audience in the position of looking at them and thinking, ‘Oh no!'” says the actor. Are they all right? ‘Doesn’t everyone see what I see?’

“The most articulate way I can describe it is that if you’re in a Black family and a member leaves and crosses the color line, even if all the white people see it, you don’t see them as white.” And that’s the point of view I wanted the viewers to have.”

Despite the fact that everything in Passing and Hall’s personal past defies the Black/white racial dichotomy, Hall is still a white woman in the eyes of the public, which presented a crucial question: was she the ideal person to bring this “Black” narrative to the screen? Hall’s finished script “sat in a drawer for six years” as she wrestled with the issue, and Passing spent another seven years in funding and production once she reached her obvious decision.

She has had plenty of opportunity to reflect about identity and representation from a variety of professional perspectives as a result of the whole process. She now differs with Scarlett Johansson, her former Vicky Cristina Barcelona co-star, who declared in 2019: “As an actor, I should be allowed to play any person, tree, or animal, because that is my job.”

“Our tendency as actors is to be like, ‘Well, I can play everything!’” adds Hall. ‘I can shorten myself!’ But this isn’t entirely accurate. And it isn’t always correct, and I don’t believe it is the role of actors to make that judgment.

Actors should definitely be the last people to be questioned about this!” She is aware, though, that the conversation is nuanced. “I don’t want to limit myself to playing the daughter of a theatre director or the daughter of a mixed-race opera singer.” That would be somewhat restrictive.”

Clearly, Hall’s acting abilities are unrestricted. Her 2017 film, Christine, was an incredibly dramatic turning point even within a career of varied, stage-and-screen appearances. Christine Chubbuck, a Florida TV news woman who committed herself after a 1974 broadcast, was largely regarded as the greatest performance of her career.

The film’s open confrontations with patriarchy, media exploitation, and mental health seemed to signal a new era in Hall’s public life. She apologised for working with Woody Allen and donated her money to the Time’s Up movement in 2018, after the re-emergence of sexual assault claims against him (which he denies).

“My actions have silenced and dismissed another woman,” she wrote. “That is not something that I am comfortable with.”

Hall represents an underrepresented minority as a female filmmaker, but the numbers are rising, and many of the first-timers have taken a similar road. Maggie Gyllenhaal, Kristen Stewart, and Taraji P Henson are all set to make their directorial debuts in the near future, while Greta Gerwig, Olivia Wilde, and Regina King have already done so.

“There are a lot of actresses who have turned directors right now,” Hall says. “Of course, I’m championing them all.” However, it would be wonderful if there were further options. Working as a PA [production assistant] is a common way to get into the film industry, but the fact is that working as a PA on a film set in America is… impossible.

For example, the hours are hard to work, and you are not compensated, so it is strictly a luxury for those with financial resources.”

Hall is the first to admit that she is among the fortunate few, but she has been discriminated against as a woman and, more particularly, as a woman who wants to produce films about women, despite her privileges. Part of it, she claims, is internalized sexism, which makes being a muse to male filmmakers seem like the easiest option: “It’s not like I don’t enjoy acting or haven’t gotten a lot out of it.”

But I’ve always been fascinated with movies.” Other sorts of sexism she had encountered were more external: “It’s like, ‘Was that a teeny-tiny act of aggression?'” …’I’m not sure…’ I approach everything with a ‘kill them with kindness’ mentality. But it still implies you’re in charge of something a guy wouldn’t be in charge of.”

“The thing that you can’t learn is your relationship with your gut, and your relationship with the frame,” she says of the most significant lesson she learnt on other people’s sets. That’s what it all comes down to in the end. ‘Is this my taste?’ you think as you gaze at a frame. Is this the sensation I’m looking for?’

After years of being watched, Hall is now the one doing the watching, which seems to be a more comfortable position. Reading interviews from her early career transports you back to the bad old days of celebrity arts reporting.

She always appeared to be on the receiving end of that pre-#MeToo profile sub-genre in which the (typically older) male interviewer is torn between patronizing his subject and perving on her. “Yes! With a somewhat sour chuckle, Hall responds, “I’m really glad you said that!”

She might still come out as cautious, which is understandable. Only a part of what goes through her face as she is developing a reaction is expressed in the feelings and views to which she finally gives voice.

“I’ve definitely entered a slightly ‘fuck it’ stage of my life,” she admits. This film would not have been made if it hadn’t been for her. “Everyone remarked, ‘Oh, it’s fantastic!’ when I first began presenting [the script] to others.

There have been no other efforts to adapt Passing for the cinema in the almost century since it was published, according to Hall. Despite Larsen’s wonderfully evocative style and the continuing relevance of her issues, this is the case.

“It’s something I think about a lot: why the hell wasn’t this made into a movie?” “I think it just took the world – well, not the world, the people who control the purse strings in Hollywood – a really long time to realise something: the emotional lives of two Black women is actually, incredibly, potentially mainstream,” she says, after seeing her film at various screenings since its Sundance premiere and seeing how powerfully it connects, particularly with the chronically underserved female audience.

Thanks to Ellen E Jones at The Guardian whose reporting provided the original basis for this story.