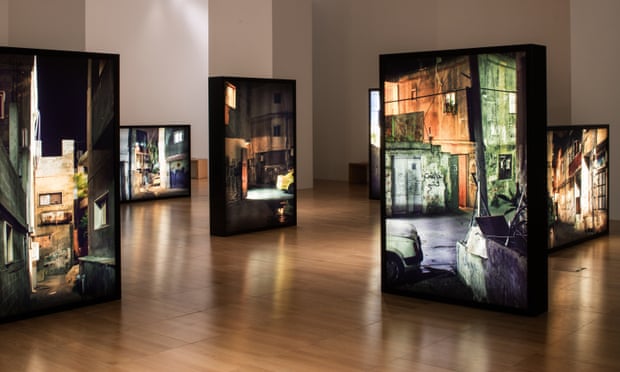 The Dheisheh refugee camp, located near Bethlehem, does not seem to be your typical Unesco world heritage site. To begin with, there are no souvenir stands or hordes of trinket sellers.

Instead, the entrance to a corner store is framed by crumbling concrete walls covered with Arabic graffiti, where an ancient photocopier sits next to a few meager shelves of supplies. A taxi sits in the middle of a potholed street, amid heaps of shattered breeze blocks, with power and phone lines dangling dangerously above.

However, a new exhibition at the Mosaic Rooms in London argues that this run-down site of mass relocation deserves the same level of protection as Machu Picchu, Venice, or the Taj Mahal. Alessandro Petti adds, “We want to destabilize traditional western notions of heritage.”

“How do you document the exiled culture’s heritage? How can you appreciate the history of a stateless people when world heritage sites may only be nominated by nation states?”

Petti has been collaborating with Sandi Hilal, the founder of DAAR (Decolonising Architecture Art Research), since 2007, navigating the realms of architecture, politics, and development deftly. They’ve been working with Palestinian refugees in the Dheisheh camp for the last seven years to put together an unusual dossier to present to Unesco, arguing for the location’s “outstanding universal value” as the site of the world’s longest and biggest living displacement.

They have utilized the UN historic agency’s own esoteric nomination standards to undermine the concept of international heritage preservation and call into question assumptions about the status of this ostensibly transitory camp in a process they characterize as “playing seriously.” “Is the camp just a place of misery, or does it produce values that need to be recognized and protected?” they wonder.

A cluster of huge, freestanding light boxes in the ground floor gallery, blazing with evocative images of the Dheisheh camp, established the tone for the show. Luca Capuano, an Italian photographer who was previously commissioned by Unesco to capture Italy’s renowned world heritage sites, took the photos.

Petti and Hilal wanted to transfer some of the artistic romanticism of his meticulously prepared night-time pictures of Venetian alleys and Tuscan hill-town piazzas to the refugee camp’s ramshackle mess. With pools of light pouring from ajar doors and enticing alleys inviting you around the corner, the sceneries have a beguiling filmic feel.

If you squint hard enough, you may think you’re in Venice – a picture of which is provided for contrast, remembering the city’s origins as a sanctuary. It’s a far cry from the typical depictions of refugee camps, which are often portrayed as dismal, sun-drenched wasteland.

Dheisheh was founded in 1949 to shelter more than 3,000 Palestinians who had been driven out of their homes by Jewish militias during the Arab-Israeli conflict. It has since grown to house 15,000 people.

It started as a tent encampment, set up on a military grid over an undulating tract of land leased by the Jordanian government to the United Nations Relief and Works Agency (UNRWA) (which still technically owns the land). The UNRWA started constructing tiny concrete shelter rooms for each family in the 1950s, with a guideline of one square metre per person and a toilet shared between every 15 shelters, as the war showed no signs of abating. Families added more rooms as time went on, and plots were haphazardly combined, enlarged, and built up.

Dheisheh, which has been a refugee camp for more than 70 years, does not resemble a typical refugee camp. When I returned in 2018, I discovered meandering alleys of multistory concrete homes, a dense urban area of self-built structures that had developed piecemeal over the decades, rather than rows of tents or shelters.

There are stores and schools, mosques and a community center all crammed into a half-square-kilometer area. The odd UN-branded trash truck patrolling the tiny roads is the sole indication of its status.

The walls are still naked, and steel reinforcing bars protrude from most roofs, but there’s a purpose for this. Dheisheh is the result of being compelled to live in continuous limbo, with the goal of one day escaping, producing a condition of “permanent temporariness,” as Petti and Hilal describe it. Families cling to the hope of going home to their ancestral lands, which are just a few kilometers away, beyond the impassable concrete wall of Israel’s security barrier.

“Among Palestinian refugees, there is a widespread belief that if you consider the camp your home, you will jeopardize your right of return,” says Hilal, who grew up in the neighboring town of Beit Sahour, a hotbed of political activity. “People try to improve their buildings and living conditions, but they are embarrassed to personalize their homes.”

She recalls coming across a guy who was excavating a little swimming pool in his backyard. When she inquired about his whereabouts, he got defensive, thinking she would accuse him of making the camp his permanent residence.

“There’s a stigma attached to settling too much.”

International views aren’t helping matters. Hilal recounts “tours of misery” for international tourists near Dheisheh, part of the catastrophe tourism business that has produced such unexpected local attractions as Banksy’s Walled Off hotel in Bethlehem, which boasts views of the graffiti-covered concrete security wall from every room. She claims that “the only recognized history is one of violence, suffering, and humiliation.”

“How can we tell the camp’s story in a more positive light?”

For the London show, they’ve turned one of the gallery’s rooms into a living room, or “madafeh,” where Palestinian community organizer Omar Hmidat will host weekly Sunday meetings in conjunction with a counterpart space in Dheisheh, which will be connected through Zoom. It’s brimming with gifts from local Palestinian expatriates, including a collection of music cassettes, a handmade rug from Gaza, and Hmidat’s own oud.

“It’s a way to contaminate the white cube concept,” Petti explains. “We want the exhibition to be a hub for gathering and production,” says the curator.

A dramatic exhibition of the 44 villages surrounding Jerusalem and Hebron from which Dheisheh’s inhabitants were forced to leave puts the Palestinian right of return into clear relief in a third chamber below. Capuano’s photos are displayed in large-format books on spotlit plinths of varying heights, creating a dynamic landscape of exile.

The communities of Palestinian families have become unrecognizable in the 70 years after they were evacuated. Where Palestinian houses previously existed, some are now Israeli national parks, replete with picnic tables.

Others have been converted to industrial areas, with concrete silos and steel structures trampling over the fields and fruit trees. The majority, however, are covered with pine and eucalyptus trees.

“Greenery is used to hide the crimes,” Hilal says.

The settlements are considered a parallel historic site to the camp in its companion book, Refugee Heritage, which describes the process of preparing the world heritage candidacy. They take Unesco’s word for it when they say that a world historic property’s exceptional global significance is determined by its capacity to “transcend national boundaries.”

What better example, they say, than Dheisheh and its surrounding villages, a place “that transcends these boundaries through its lived reality of statelessness, refugeehood, and exile”?

The political impossibility of their objective adds to the poignancy of their art. Of course, their candidacy will never be accepted by Unesco since it is an extraterritorial territory created out of a state’s jurisdiction and home to a stateless people.

Thanks to Oliver Wainwright at The Guardian whose reporting provided the original basis for this story.