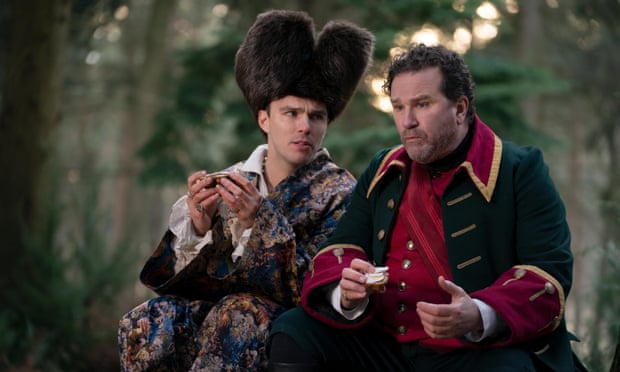 A photograph of Nicholas Hoult in military attire sits on the wall at the top of the stairs of his Los Angeles residence. “That’s very, very normal,” the actor deadpans before laughing heartily. It’s a prop from the set of The Great, the gruesome and gaudy TV program in which he appears as Russian ruler Peter III, so it’s not some sort of big-headed monument to himself.

Elle Fanning, his co-star, laughs as she confesses to snatching a butter sculpture of herself (“I get a lifesize version in the show, but I just took the little one”). In reality, in juxtaposition to other decorations, such as a baby’s teddy bear reported to be “made from a real bear” and Hoult’s onscreen mother’s mummified bones wheeled about in a glass case, the picture and sculpture begin to seem ordinary, even plain.

The Great isn’t your typical historical drama, since it was created by Tony McNamara, co-writer of the Oscar-winning picture The Favourite. It alters and embellishes the account of how Catherine the Great (Fanning) toppled Hoult’s Peter to become Russia’s longest reigning female leader in a bawdy, raunchy, and not-at-all historically correct comedy-drama shot through with feminist revisionism.

Hoult, 31, was cast after nailing the part of the Earl of Oxford in The Favourite as a “flamboyant, cruel egotist in a wig.” Meanwhile, Fanning plays Catherine well, seeming much older than her 23 years but always with a sense of youthful playfulness.

Its first season aired weekly on Channel 4 in early 2021, after being initially distributed on streaming provider StarzPlay in the UK. With wild party scenes, gory fights, and a zippy screenplay full of waggish one-liners (“women are for seeding, not reading”), it struck viewers like a slug of vodka down the neck.

It immediately became a word-of-mouth success across the Atlantic after receiving critical praise — and two Emmy nominations – in the United States.

The storyline was very interesting. Season one saw Catherine, a brilliantly intellectual and progressive woman, flee Germany for Russia, only to be profoundly disgusted by Peter, who was carelessly aggressive but pitifully stupid. Unfazed, she went about her duties as usual, even maintaining her cool when her new love presented the head of a Swedish soldier for supper on a silver platter.

Catherine decided to reform Russia by taking over as empress, organizing a motley gang to execute a coup not long after Peter’s unsuccessful attempt to drown her. There was one additional issue: she was expecting a child.

Catherine’s fury was heightened when Peter apprehended her lover, and the gunshot signal was fired.

Four months later, the civil war has come to a halt in the second season. It’s evident that not much has changed as bored youngsters kick a severed head around for pleasure.

Peter ultimately relinquishes his position because… well, he’s hungry. “I use roasted food to lure him out of hiding,” Fanning says. “It’s very simple – he’s a very simple man.” “Now what are you going to do with it?”

Catherine asks, as she now obtains the authority she so desperately desired. Is it really possible for you to be a good leader? “Becoming a mother to both Russia and her own child is something she’s grappling with.”

Peter voluntarily becomes Catherine’s prisoner in his apartments, where she also uses him as her eager sexual servant, certain that this is a transitory state of things and delighted about becoming a parent. Hoult notes, “[He] still believes himself to have wonderful plans in the works.”

“But also, each time he sees Catherine’s strategicness, ruthlessness, and ability to be his match, he falls more and more in love with her.” However, as the series unfolds, Catherine’s progressive ideals – female education, serf liberation, and the end of civil war – become too extreme for the court, which pines for the good old days of murder and debauchery.

This season, the empress spends a lot of time seeking to usurp her husband’s popularity and demonstrating she’s a riot. “To show that her character had ‘lost herself’ at the party,” Hoult explains, “Elle decided she needed Catherine to do something crazy that she’d regret in the morning.”

“She came up with the brilliant idea of serving macarons from her pregnant belly while walking around in a bridge pose.” Fanning boasts that she presented her party trick to the director and authors four times.

“I gave a lot of folks a show-and-tell. Everyone wanted to see it, and I was thinking to myself, ‘Oh gosh, I have to get down again.’

Catherine gets a visit from her mother Joanna amid the upheaval and changing power relations in Peter’s playground (Gillian Anderson). Because the ensemble only gets two scripts at a time during shooting, Fanning admits that there were a lot of rumors about who would play the part – actual court gossip.

Anderson then appeared on set, fresh off her role as Margaret Thatcher in The Crown. “You could tell she shared our sense of humour, that she watches the show and wants to be a part of it,” Fanning adds.

“She breathes new life into the series, and she reveals a side of Catherine that we hadn’t seen before.” Anderson embraces the series’ humor, taking on a highly ludicrous narrative that generates some of the greatest laughs, in addition to establishing herself as the harsh grandmother who changes Catherine from a ballsy monarch to an obedient kid.

Not to be outdone, Peter also has a famous father in the form of Jason Isaacs, who appears in a brief but memorable sequence that explains how he came to be the way he is.

Both parents’ arrival is crucial, as Catherine and Peter had spent the season preparing to welcome baby Paul (“That was their firstborn’s real name!”). Fanning chuckles. “We do play with history, but it was completely accurate at the time.”

Paul, it’s just too amazing to be made up.”) The impending delivery even reveals a new side of Peter, one that makes you almost like him. Peter is “not good at showing it, but he does really try and love Paul,” Hoult says of the aforementioned “real” teddy bear. It’s lovely that he wants to be a father.”

Apart from this new paternal aspect, Hoult’s main connection to Peter is his enthusiasm for food: “I love his foodie nature and how passionate he is about it.” In some respects, that’s his worst flaw — it’s why the empire gets given over.”

Fanning, on the other hand, rattles off a list of things she admires in Catherine: “I’m guarding her feistiness and arrogance, which we’ll see more of this season.” I like her for being outspoken and fearless; she speaks often and puts her foot in her mouth.”

Despite their adoration and a few stolen props, they are a long way from their roles as two individuals who believe they are entitled – even destined – to lead a nation. Much of the show’s enjoyment comes from seeing the two take harsh verbal (“I look at you and I dry like sand,” Catherine says Peter) and physical (fighting with sharp knives is a common activity) swipes at each other to obtain what they want.

The tale is conveyed via the feminine gaze, which goes opposed to the patriarchal oppression of the period (much like some of its counterparts, such as Outlander and The Crown). But The Great is willing to go even farther, mocking its superiors by having Catherine assume Peter’s nefarious characteristics while also harming him.

Catherine isn’t a sadist like her husband, but she’s far from faultless. Indeed, during the smallpox epidemic in season one, her shell hardens while Peter’s softens, presumably highlighting the crucial distinction between these leaders – and predictive of how they would manage, say, a pandemic.

Thanks to Hollie Richardson at The Guardian whose reporting provided the original basis for this story.