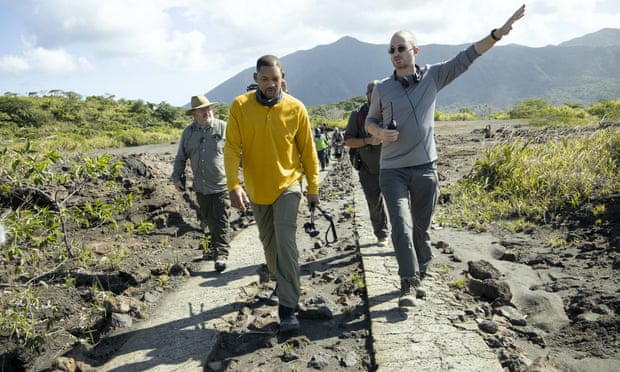 Will Smith had a troubled expression on his face. He’s going to rope over a massive canyon, and if a fall doesn’t kill him, the crocodiles in the river below would.

He grins deliriously on the opposite side, having been carried over by Albert Lin, an adventurer. A stuntman would have done it for him in a movie, he claims. In Welcome to Earth, a six-part National Geographic documentary (Disney+), Smith has a number of new and unsettling encounters.

He’s abseiling down a vast ice hole and diving to the ocean’s deepest depths in a submersible, all with a terrified expression on his face.

This is a Hollywood-style nature documentary made by filmmaker Darren Aronofsky. It’s his and Smith’s second time using Earth as their set (they also made the 2018 series One Strange Rock). You may remove the guys from Hollywood, for example.

The music is unrelenting, there are trite themes about Important Things like mastering fear or appreciating the beauty of the planet – given in artistically lit black-and-white cutaways – and a cast of photogenic explorers who follow Smith “to the ends of the Earth – and beyond.” A diver goes swimming with manta rays, languid as a soft-close toilet seat, and we’re meant to think it’s very hazardous, like a scene from Jaws.

The series’ goal is to uncover hidden worlds and challenge preconceptions. Some of it is really rather dull — you have to be quite engaged in filmmaking to care about cameras that much. That’s why I usually skip the last few minutes of David Attenborough movies.

And part of it is superficial. Our guides may be explorers in the physical sense, but they don’t have much space to offer intellectual exploration. “Entering a cave is very similar to entering space,” one genuine astronaut explains. Is that correct?

What do you mean by that? I’m not sure, but I believe it has something to do with aliens. Another, using his fancy camera, demonstrates how the Namibian desert changes over time, but fails to explain the dynamics at action. It may be the wind, or it could be because of the way we’re speeding through space — I couldn’t tell. This isn’t Attenborough.

Instead, emotional inquiry is the focus. “It’s not about discovering the world, it’s about discovering myself,” Smith says of the travels. Nonetheless, he’s a pleasant guide who walks a fine line between sensitivity and strength.

He may be seen as a self-assured action hero, but he admits to having a lot of phobias. While being helicoptered over a glacier in Iceland, he comments about himself as a youngster, “I was scared of everything.” “I was constantly bullied.”

The varied mix of explorers that follow Smith or host their own parts offer their own amazing tales of perseverance and are a great complement to the world of white guy poshos traveling.

Erik Weihenmayer, a blind climber, takes Smith to the brink of a volcano and educates him about the spectrum of sound in the first episode. Later, photographer Cory Richards and a team of bioacoustic experts venture deep into a cave in the Dolomites to feel the heavy quiet and capture the mountain’s sound — a deep primordial rumbling.

Smith’s voiceover states, “It’s actually thought to be the sound of the moon’s gravity dragging the mountains.” “Tides are created by the moon pulling on the sea.” It turns out that it also affects the land.”

The earth underneath New York City, according to reports, may rise up to 14 inches twice a day. “They’re known as earth tides,” Smith explains. This is my kind of thing.

Other episodes offer moments of genuine awe, as befitting a high budget and a Hollywood director’s vision. I’ll never get tired of witnessing strange animals — the olm, a pale meaty blind salamander found in Slovenian caverns, was a new one for me, and even our boring brown Channel has some lolloping sea anemones.

The picture is incredible, with the Milky Way mirrored in Bolivian salt plains, Nepalese honey hunters mounting dizzying climbs, and bioluminescence in a bay in starlit Puerto Rico.

“My grandmother used to say to me when I was a kid, ‘All the best things in life [live] on the other side of fear,'” Smith says. Is he able to overcome his fears? Is it possible to connect with the environment?

All while being charming and in front of breathtaking backdrops? Let’s face it, this is Hollywood, so he has to.

Thanks to Emine Saner at The Guardian whose reporting provided the original basis for this story.