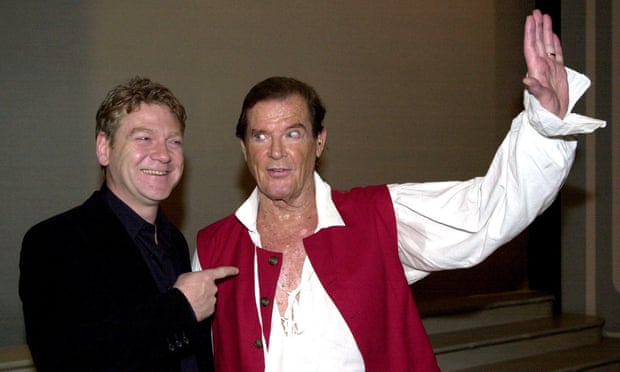 Sean Foley is a co-writer as well as a performer

It was all the fault of [producer] David Pugh. In 1988, I co-founded The Right Size with Hamish McColl, a tiny two-person theatrical group that created work that was midway between European physical theatre and British variety.

One of our shows had moved to the West End, so we’d had some success. “I want you to make a show about Morecambe and Wise,” David remarked one day in 2001 when he called us in.

We made nice sounds in the room, but as soon as we exited, we exclaimed, “This guy is an idiot.” It seemed to be a poisoned chalice: as a double-act, attempting to imitate one of the most renowned double-acts of all time is definitely the riskiest thing you can do.

But David continued to annoy us, so we produced a mock screenplay for him in the hopes that he would see the mistake of his ways. He, on the other hand, did not. It was a hit with him. And we said to ourselves, “Oh God, we’re going to have to do this.”

The answer we came up with is that we don’t imitate anybody in The Play What I Wrote but ourselves. On stage, there are two characters named Sean and Hamish: Hamish wants to put on a “serious” play that he’s written (which is really Ernie), whereas Sean wants to perform humor (a very Eric thing to do).

It was a tongue-in-cheek tribute to Morecambe and Wise. The goal was to explore what it meant to be a double-act while also channeling Eric and Ernie’s comedic essence.

Eddie Braben, who created a lot of their content as well as a few new jokes for us, was a huge help. He insisted on getting paid per joke, which was extremely old-school of him. It was the way things were done back then.

A guest celebrity comes in the second part of the performance, emulating what occurred on the Morecambe and Wise TV specials. We were apprehensive that no one famous would want to do it, but happily, a few guinea pigs kicked things off.

Then one night, Ralph Fiennes walked into the dressing room and declared his admiration for the performance, and we immediately hired him. That’s how it went. The entire event was a kick-in-the-pants scramble.

One of the things I’m most pleased of is that, while not attempting to imitate Eric and Ernie, we were able to recreate at least part of their humorous universe and elicit a feeling of nostalgia in the audience. “Oh, I remember that bit!” someone would exclaim. We’d written it ourselves, so they didn’t recall it at all.

Toby Jones is a well-known performer

I’d known Sean and Hamish for a long time and had seen their every move. They were really astute. “Don’t do it, it’s a really bad idea,” I advised them when they informed me they were intending to stage a program on Morecambe and Wise.

Then they asked whether I’d be interested in joining the cast and playing the supporting roles they’d written — a lot of little parts. No, I answered grandly, that didn’t seem very inviting.

As a result, it boiled down to one character, Arthur, who was a nod to a character from the original programs. “Not now, Arthur,” they’d exclaim as he came on with his harp. I took up the identity of Arthur.

Because David Pugh persuaded Kenneth Branagh to direct, the entire affair seemed a lot more dramatic, especially because we were supposed to move to the West End after beginning in Liverpool. There was a screenplay, but it was a rudimentary one, as I remember; we had to tighten it up and get it put down correctly.

Of course, the program kept changing, partially due to the guest-star situation — the way it worked was that Arthur would appear in the first half disguised as the celebrity, before the star arrived in the second half. It wasn’t so much mimicry as it was a clumsy effort at impersonation.

That was the punchline. They wrapped me up in bandages because Ralph Fiennes had been in The English Patient.

I got on with Bob Geldof and began cursing. I had to wear Kylie Minogue’s outfit when we had her. I was always changing outfits.

It wasn’t an easy spectacle to put on, either. Roger Moore fainted on stage one night after a dance performance while we were performing it on Broadway.

Although I was offstage at the moment, I heard the crowd become silent. “Oh my God, he’s dead,” I thought as I turned around to see him stretched out on the floor. “I’m so sorry – Roger Moore is unwell,” Sean stated as they pushed back the curtain.

“A doctor is on his way.” The crowd applauded. They thought it was all in good fun.

He seemed to be well. He got back up and watched the rest of the program.

Thanks to  Andrew Dickson at The Guardian whose reporting provided the original basis for this story.