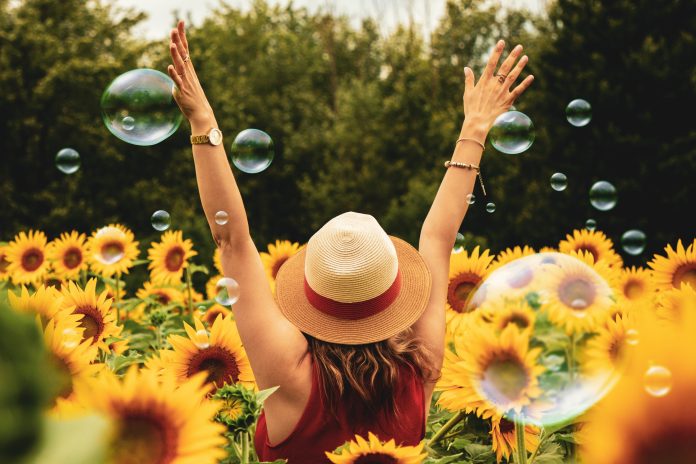 The movie High Fidelity, starring John Cusack, is a modern classic. And if you haven’t already seen it, you should put it on your schedule for later today, or right now. Up to you.

Anyway, the opening scene and monologue is fantastic. Basically, our protagonist is feeling wistful and contemplative.

He reflects on the fact that we’re always so worried about kids watching movies with explicit violence or sexual content, and yet we’re not worried at all about kids listening to countless songs about heartbreak, loss, and failed relationships in general.

It’s true. For whatever reason, popular mainstream music has more or less come to be synonymous with songs about love and relationships.

Thankfully, not all pop songs are about the sad side of love and life. We’ve gone out of our way to create the following list of songs about being happy with life.

We all need a pick-me-up now and again, and every one of these songs is a great start. And as always, feel free to leave your own favorites in the comments.

If you’re looking for music that’s a bit more cerebral, then you should check out this article on how to get started listening to jazz.

Walking on Sunshine – Katrina and the Waves

It’s hard to believe that this song was ever new. At least for me, it feels like it’s just always been around.

I remember it being the opening song to Daddy Day Care (the original, the sequel did not hold up AT ALL). It also shows up in High Fidelity, mentioned in the intro.

It’s also been used for a huge number of commercials, movie trailers, etc.

And rightfully so. I mean, come on. It’s just a song about pure joy, and specifically taking the effort to feel good.

It’s also another one of those songs that almost forces you to dance immediately, regardless of where you are when it comes on.

This an early Beach Boys track, from before the time where Brian Wilson got all moody and sad and wrote Pet Sounds, one of the greatest pop albums of the 20th century.

And yeah, the Beach Boys weren’t exactly a hippie group, especially when it came to their musical style, but this song makes use of simple hippie ideals: feeling good, being nice to people, and just riding a positive vibe.

It’s wonderfully sing-along-able and has the power to remind you to relax a bit and take things as they come.

Simon & Garfunkel built a career on writing incredibly sad and introspective songs, for the most part.

But Cecilia just doesn’t fit that description at all.

It’s upbeat as all get out and really just wants to make you smile. When first released, it immediately found success, perhaps because it was so much lighter and more accessible than the bulk of their work.

This is another one of those tracks about being happy with life that has become a kind of folk song for the modern age.

In fact, when I asked some friends whether they knew the song, they all said yes. However, almost all of them were unable to name the artist behind the song.

And it’s understandable, to a certain extent. Bobby McFerrin didn’t really have a very long-lasting career, not outside of thing song, anyway.

Plenty of people mistakenly guess that this is a Bob Marley track, which it’s not, at all. Not even a little bit.

But much more important is the fact that the song has a very simple message, and obviously, one that’s overwhelmingly positive.

This song wasn’t exactly a smash hit at the time of its release a few years ago, but it’s definitely a song about being happy with life.

And more specifically, it tries to capture that elusive feeling of falling in love with someone.

It’s guitar-driven power-pop at its best. And those vocals …

Some people may find her vocals a tad annoying. Debbie Downers is what we call those people.

It’s a cute song that wants to remind you of what it feels like to (finally) find someone you really really really like, and wanting to be around them all the time.

Neil Young is another famous songwriter who tended to focus on melancholy subject matter in most of his work, especially when he started writing modern-day protest songs in the 1980s.

But Sugar Mountain is a lovely little tune from early on in Young’s career, when he was still performing extensively in his native Canada.

It paints a picture of a kind of hippie, lovechild paradise, where all is well and there’s no reason to think about life’s many worries and challenges.

This song is the musical equivalent of a glass of fruity soda. It’s tasty, sweet, and goes down real easy.

Since I Left You – The Avalanches

This song is a bit of an oddball on the list. It’s still a song about being happy with life, but it doesn’t actually feature any original lyrics.

In fact, the album it’s from is made up on 100% samples from other songs.

The Australian group behind the song, The Avalanches, are incredibly talented when it comes to making parts of many different songs work well with each other.

The song does have lyrics, though. Most are about getting out of a bad relationship and just wanting to dance about it.

This is probably the most obscure track on our list. And don’t worry, we’re not trying to pull the hipster card here, it’s just a great tune and a lot of fun to listen to.

Don’t expect the lyrics to make much logical sense, though.

Jack Stauber is a musician and animator from Pittsburgh, Pennsylvania. He has an incredibly active YouTube channel where he uploads killer micro-pop tunes for the enjoyment of others.

Buttercup is a lo-fi wonder. It’s bright, tight, and it perfectly captures the feeling of a spontaneous good mood.

Check it out right now and try to keep yourself from dancing. I triple dog dare you.