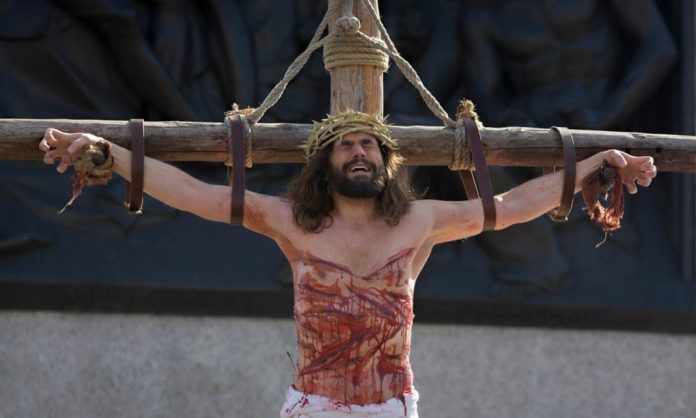 Slink Johnson, the comedy actor, had a distinct vision of Jesus Christ in his head while he was growing up in Arkansas. He describes him as a “clean-ass white man with clean-ass robes.” “There’s never a stray hair in sight.”

You had to be kind to him or his father would toss you into a lake of fire, you understand?” “He was always holding his hands like this,” he says through Zoom from his home in Los Angeles, where beautiful sunshine streams through the shutters behind him. He also raises his hands aloft.

None of this applies to Johnson’s portrayal of the Son of God in the comedy Black Jesus, which aired for three seasons between 2014 and 2019. In modern-day Compton, Johnson’s Christ is an African American stoner chilling in his robes, sandals, and crown of thorns.

Despite his marijuana addiction, Jesus is the Messiah, not a mischievous adolescent. He may laugh at inquiries for the lottery numbers for the next week, but he will gladly use his heavenly power to assist you with finding your keys (“Living room, couch, right pillow”). “I told y’all, Pop’s got a plan,” says the big guy above to everyone who is dissatisfied with their place in life.

It’s one of the most unconventional depictions of Jesus, but it’s also one of the loveliest. Johnson’s tender performance is crucial to this. He adds, “I’d like to think he represents the best of me, minus some of my more worldly ways.”

Any controversy sparked by Black Jesus was little, and it couldn’t last long against the show’s lighthearted comedy and positivity. “I believe people expected it to be edgy, overly urban, or ghetto,” Johnson says. “However, it exudes a genuine warmth.”

However, since the controversy over Monty Python’s Life of Brian in 1979, views against representations of Christianity have changed. Or Jesus Christ Superstar, for that matter.

Though it is today considered a classic of musical theater, the show’s UK debut in London in 1972 was met with protests, as its star Paul Nicholas recalls. “There were people holding placards outside the Palace theatre,” he recalls.

“It was a little risky to label anything Jesus Christ Superstar. Things were a little tense. It also featured a wild, rocky soundtrack. Of course, after people watched the presentation, they could see how meticulously it was put together.”

The same may be said of another Jesus interpretation that sparked even more controversy: Jo Clifford’s The Gospel According to Jesus, Queen of Heaven, which she wrote and performed. Clifford tells me, “I read the gospels and was incredibly moved by the figure of Jesus.” “To my astonishment, I admired him a lot.

I considered the article I was writing to be a devotional act. I figured it wouldn’t garner even a smidgeon of interest.” When she arrived in Glasgow in 2009 to present her play, which is based on a sermon, she was met by a slew of demonstrators who were outraged that a transgender woman was portraying the Son of God as a Daughter.

Clifford’s play was influenced by the hatred she had experienced since becoming a woman. “Every time I went out, people laughed, pointed, and yelled abuse at me.” When you read the gospels, you’ll see that Jesus is always reaching out to disadvantaged and prejudiced individuals.

The crowd were enraged because they mistook me for someone who intended to criticize and ridicule Christianity, but that was not my intention.”

In fact, her own Jesus has attracted a sizable number of followers. “I’ve seen individuals say things like, ‘If only church services were like this when I was a kid.’ ‘You never friggin told me you were going to make me a Christian!’ shouted another.

Clifford was one of the new believers. “Before, I wasn’t truly a Christian. Reading the gospels, creating a drama out of them, and then presenting it year after year has shaped my religion.”

How did she create Jesus as a person? She chuckles and says, “I couldn’t really tell you.” “Sometimes my kids will exclaim, ‘You’re doing your Jesus voice!’ So I must have a Jesus voice, or something similar. On stage, all I do is pronounce the words as honestly as I can and with as much presence as I can.”

There is a uniting Christ-like demeanor whether Jesus is depicted as a stoner, a singer, or a trans woman. James Burke-Dunsmore, who has portrayed Jesus hundreds of times, most famously as the hero of the two-hour Passion drama performed every year in Trafalgar Square, agrees. He claims, “It’s not about appearance.”

“I’ve directed different Jesuses before, and they’ve come in various forms and sizes. However, there is a quality to conveying the material without continuously hammering home a point. The most effective Jesuses often provide a message or a judgment with the expectation that it would be returned to them in a back-and-forth manner.

People want to hear the material without being distracted by an actor’s ego or self-interest.”

Greg Barnett, who portrayed Jesus in the 2019 History Channel drama-documentary Jesus: His Life, said that becoming the Messiah meant thinking of him just as a man. “It would have freaked me out if I had looked at the enormity of him being Jesus,” he adds.

“I did receive a review that said I was ‘physically unimpressive,’ and I thought to myself, ‘That stings.’ But it was close to what I had in mind. I wanted to discover that normalcy in him: simply being a regular guy going through human agony.”

With the exception of Black Jesus, laughter is seldom present in this environment, but Paul Nicholas did manage to amuse himself on occasion during his 10-month run with Jesus Christ Superstar. “When you do it eight times a week, it starts to feel a little routine,” he confesses.

“And I can be a little naughty at times.” When a guy in the crowd sneezed, I was waiting in the dark to go on at the opening of Act Two. ‘Bless you, my son,’ I said quietly. But very softly, so that only those in the front row could hear!”

Though the original 1972 play was not videotaped, a short glimpse may be seen in the BBC comedy Till Death Us Do Part’s Christmas special that year, when Alf Garnett brings his family to attend the show before accosting Nicholas in the bar afterwards to discuss the crucifixion. “Does it ‘urt up there?” he inquires, to which the actor responds, “Well, when I get down, I’m glad.”

Even a non-believer like Nicholas was emotionally drained by the crucifixion scenario. “They would take me below the stage and attach me to this very thin frame so that when I was raised up, I appeared to be suspended in mid-air.”

That had a profound effect on the crowd. Only the occasional individual weeping could be heard. Some evenings, I was so moved that tears began to pour.

I felt so exposed and defenseless up there. In some ways, it was a religious experience, even though I am not religious. It had a significant impact on me.”

While filming his crucifixion scene in Morocco, Barnett felt the same way. “Hanging on the cross, looking out at the Atlas Mountains, which were covered in snow, was the most intense, insane experience,” he recounts. “It’s an experience I’ll never forget.”

I spent a total of three days on the cross. The sun was setting behind the mountains as they were lowering me on the final day, and I began weeping hysterically. On set, everything was really calm; there was a genuine sense of peacefulness.

It took me around 45 minutes to relax after that. It wasn’t in any way negative – it was strangely cathartic.”

The position remained a job for Nicholas at the end of the day. He explains, “It’s always about acting and pretending.” “Every night, I would leave Jesus at the stage door.”

However, for Barnett, the role spilled over into his personal life. “I had a lot more time and love to devote to others.” Because you’re living and breathing your character, you can’t help but behave like him when it’s Jesus.” It also looks excellent on a CV, of course.

“Absolutely. When I informed my mother I’d gotten the role, she was ecstatic. ‘Ooh, may I introduce you to my kid, Jesus?’ she’d remark while we were out. ‘All right, mama!’ I’d say.

According to Johnson, the lessons an actor learns from a role remain ageless. He explains, “It’s about everything we learned in kindergarten.” “All the things we forgot along the way: treat others the way you want to be treated, keep your hands to yourself, and be nice,” she says.

Thanks to Ryan Gilbey at The Guardian whose reporting provided the original basis for this story.