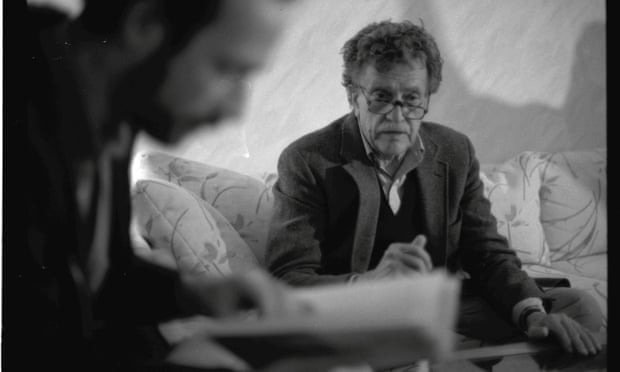 It was the start of a wonderful friendship. Robert Weide, a 23-year-old filmmaker who had just completed a film on the Marx Brothers, wrote to his literary hero, Kurt Vonnegut, suggesting a documentary about the author of Slaughterhouse-Five.

“He wrote me back, which was shocking to me, and gave me his phone number and invited me to call him, which I did,” recalls Weide, who, like many others, was enthralled with Vonnegut in high school. “Then the next time I was in New York, which was later that year, we got together and hit it off.”

It was 1982 at the time. Weide began to refer to Vonnegut fondly as “the old man” as he approached his 60th birthday. Now, at the age of 62, Weide is presenting Kurt Vonnegut: Unstuck in Time, a documentary that has been a labor of love for four decades.

Mr. Rosewater, author of Cat’s Cradle, Breakfast of Champions, Mother Night, and God Bless You, was regarded as a “oracle for the baby boomer generation” when he died in 2007 at the age of 84.

The audience feels as though they have spent a couple of hours in Vonnegut’s pleasant, witty, and humorous company, because to the effortless connection between filmmaker and subject.

The sculpture also has a “meta” dimension, according to Weide. Director Don Argott was enlisted to recount the tale of Weide meeting Vonnegut, accompanying him to book signings and premieres, and painstakingly attempting to get the documentary off the ground (with the aid of $300,000 from the crowdfunding site Kickstarter).

“When you take almost 40 years to make a film, you owe some kind of explanation,” Weide says in the film. “Full transparency.”

Weide didn’t start shooting until 1988, when he had saved up enough money. On his way to a speaking engagement in Buffalo, he first saw Vonnegut discussing on a train.

“Then, because the film was never properly financed – it was always out of my own pocket – it just became a hobby project where we’d get together and film whenever I had some spare time and some spare money,” he remembers over Zoom from Los Angeles, where numerous cassettes are stored behind him. “It worked this way on and off for years until he died,” says the narrator.

In 1994, Weide accompanied the author back to Indianapolis, where he grew up. Vonnegut is shown feeling impressions of his child-size hand, as well as the hands of other family members, that had been left in 1920s concrete. Bernie Vonnegut, Vonnegut’s brother, gave the project a boost when he brought over some 16mm family videos that had been collecting dust in a cupboard.

But the recollections were equally painful. Alice, his dear sister, died of breast cancer in 1958, only days after her husband lost in a train accident. “He’d say how much he missed her and how’she taught me what was funny; she imbued my sense of humour; we thought the same things were funny,'” Weide recalled.

“A lot of what they thought was funny had to do with a lot of good comedy, which involves other people’s tragedies.” They’d occasionally laugh for years if they spotted someone fall down on the street in Indianapolis.

He spoke glowingly about his sister on several occasions. He was never very outspoken about how her death impacted him, but his daughter adds in the video, “I don’t think he can even now get his arms around it.”

However, the defining trauma of Vonnegut’s life occurred in 1944, only months after his mother committed suicide, when he was captured during the Battle of the Bulge during WWII. He was sent to Dresden and assigned to a factory. He sheltered in an underground meatlocker during the allied firebombing of the city in 1945, only to be taken into the wreckage to gather and burn the bodies.

“I said, you were 22 years old, something like that was going to change you,” Weide adds, “and his response was, ‘The dogs in my neighborhood where I grew up had more to do with shaping my character than anything that happened during the war.'” That’s intriguing, to say the least. Then his daughter responds, “Oh, he’s lying; he’s in denial; how can that not affect you?”

“When I was 22, all I did was hang out with my friends and have a good time, doing what 22-year-olds do and getting into minor mischief.” He was removing victims from basements, stacking them, and torching them for sanitary reasons.”

“I wouldn’t say he lost his sense of humour during the Bush administration, but he had reached the point where he said, OK, this isn’t funny anymore.” He was appalled with the Iraq invasion.

“Trump would have appeared to him as a disaster, which he was.” Trump, on the other hand, is a Vonnegut figure. Mr. Rosewater, God Bless You is about folks who have much too much money, don’t know what to do with it, and yet crave more. Trump would have been one of the characters he would have mocked.”

Vonnegut, according to Weide, had a down-to-earth Midwestern sensibility and a real interest in people. When admirers approached him on his strolls in Manhattan, he surprised them by asking their name and where they were from. Above notably, Weide recalls his wit; they had a fondness for vintage Hollywood comedies.

“We had a lot of laughs together.” In fact, when I think back on our relationship, the major thing that comes to me is all of the times we laughed and joked. Because we didn’t have any baggage, our connection seemed lighter. There was nothing but lightness, unlike some of his children who had a more problematic interaction with their father than with someone else’s father.

“He had a habit of laughing a lot.” He was a sucker for stupid jokes. He had a thing for puns. In fact, there was so much laughing over silly jokes and puns in our relationship that whenever I pick up one of his books and recall how smart he was and how deep he could be, there’s a moment when I wonder, “Wasn’t that guy I know the author of this book?”

“How did that happen?” says the narrator. I’m having a hard time reconciling the two. There was a lot of gloomy laughing.

In the video, we witness him lamenting the deaths of several of his high school and college friends. He’s doubled over laughing, which seems a little out of place, but you giggle.”

The term “so it goes” was not coined by Vonnegut, who would have been 99 this week, but he made it his own by using it over a hundred times in Slaughterhouse-Five. “The idea is that you can’t mourn every loss and every death or you’ll be doing nothing else because we’re surrounded by loss and death,” Weide explains.

You’re aware of it, but you’re also aware that you’ve moved on.”