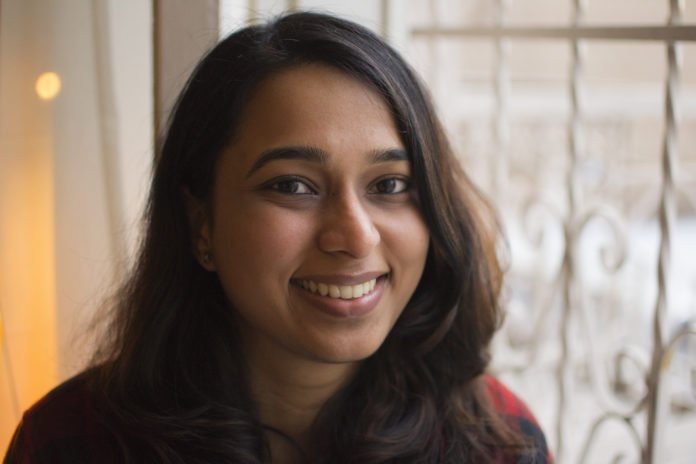 I met Vidhya Iyer on a cloudy L.A. day. This is how the city gets in the early summer, one of the only times of year when it doesn’t look like the postcard version of itself. It’s strange seeing palm trees against the kind of big gray skies I remember from growing up in rural Pennsylvania. The whole place loses its identity a little bit.

We agreed to meet at a little cafe in Hollywood, just off one of the quieter stretches of Sunset Blvd. Even with the fake French-looking bistro seating and vaguely European music playing at all times, it’s hard to forget that this is arguably the very center of the world’s media capital. It’s a given that every barista you meet in this town is busy working on their dreams in the off-hours.

Ms. Iyer is one of the few who have actually made it, but that’s putting it lightly. She’s a bona fide multihyphenate, which is hard to find these days. While some people specialize fast and early, waiting for the studios to come calling, Iyer mastered screenwriting then continued to expand her talents into the worlds of directing and stand-up comedy as well.

But the writing is more than enough to keep her busy, and with multiple award-winning shorts and a cunning TV pilot under her belt, the industry is catching on. Are you ready to hear the slew of nods and accolades that Iyer has tacked on? Not quite? Well that’s too bad because here they come:

-Launchpad Tracking Board included Iyer in their list of Top 100 screenwriters (and as the decisions continue she’s now one of the top 10 within that list), as well as featuring her on their Young & Hungry list.

-The Blacklist rated her TV pilot, ‘PG 30,’ as being within the top 5% of scripts on their site.

Ms. Iyer arrived early: hip, calm, and smiling. And that smile stayed on for pretty much the whole interview. In the throes of a jaded industry that often feels like one enormous game of Hungry Hungry Hippos, it’s genuinely refreshing to meet someone who’s so happy to be a part of it all.

Given the long, running list of honors and awards that Ms. Iyer just keeps adding to, I was anxious to know which of them have stuck with her the most.

“Being on the Tracking Board Launchpad’s Top 10 Writers and making their Young and Hungry list in 2018 has been amazing. I’ve also thoroughly enjoyed being a part of the CAPE family.”

The Tracking Board’s list of top writers starts out at 100 and slowly slims down to determine the absolute best of the bunch. I wanted to know what it felt like to hear that she’s now one of the last 10 contestants.

The Tracking Board, as its name implies, has become famous for tracking along with the ins and outs of Hollywood, from the latest news on current productions to in-depth stats and figures on the performance of new releases to taking the pulse of the entertainment industry to help determine tomorrow’s most influential names in writing, directing, and production. And Vidhya was honored to be featured by them.

“It felt fantastic. The Tracking Board is such a reputed organization and being on their list is very satisfying. Feels like the hard work I’ve been putting in for the past few years is finally paying off. Getting recognition from top industry professionals and being on the radar for companies like Zero Gravity Management is just thrilling. I’ve gotten to meet so many fantastic people in the past month because of this. I’ve also gotten to meet some of my peers from the Young & Hungry List, which has been great!”

All this recognition has helped to bring Vidhya Iyer into the fold of the entertainment industry, seemingly for life. It’s a strange and interesting time in Hollywood, with attempts to move the industry into a more accepting modus operandi. Ms. Iyer sees it happening, but she already knows where she’d like it to end up.

“People say that there is a push for diversity and there is, but I’m waiting for a time when diversity will stop being a trend and the fact that art should reflect the world we live in is enough of a reason to have the stories we tell.”

And what kinds of stories does Vidhya tend to focus on?

“I’m a writer who enjoys telling stories of characters who don’t seem like underdogs and giving the audience empathy for characters that they might not instantly understand. I like to build a connection between the protagonists of my stories and the readers/ audiences. I like to tell the stories of adult women trying to find themselves and “come-of-age”. It’s important to me that I tell stories from the female perspective and find humor in the things about the patriarchy that are inherently flawed.”

Currently, Iyer has her hand in multiple projects, including a television pilot in collaboration with Mutant Films, based in Mumbai.

“I’m not allowed to reveal too much, but it’s a family dramedy about a modern Indian family across multiple generations.”

Even more impressive is the work she’s doing with one of her all-time cinematic heroes.

“I have several dream projects. I’m working on a Steven Spielberg show right now, that in itself is a dream come true. I’m also pitching a TV series for a dramedy which is exciting. I think however, that my true dream would be a TV comedy about a group of friends.”

Nothing is untenable for Vidhya Iyer’s future in Hollywood and the entertainment industry as a whole. And she stays committed to telling important, emotional stories that reach a wide audience effortlessly, highlighting relatable elements of ultra-specific narratives. And even at this advanced stage in her career, she remembers to keep her head in the all the craziness of Hollywood.

“The biggest lesson I’ve learned is that it is an industry of feast and famine and not to take anything personally. Be it notes from a producer or pitch meetings, we are all trying our best to tell good stories and to tell them well. Taking notes on scripts personally hinders collaboration. While it isn’t easy to be objective about your own work, I’ve learned to separate myself from my work.”

It’s a poignant thought, and one that’s likely to stay with me for a very long time.