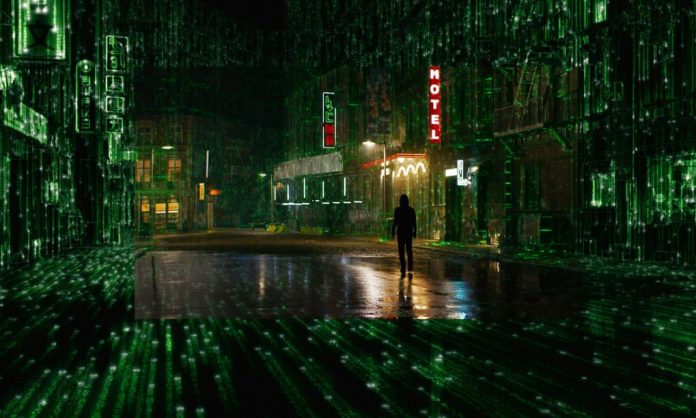 “We can’t see it, but we’re all trapped inside these strange repeating loops,” says a character in The Matrix Resurrections. Surprisingly, techno producer Marcel Dettmann was tapped to provide the score for the newest installment in the series.

It’s a perfect match. Lana Wachowski, the film’s director, goes dancing at Berghain, the Berlin techno club where Dettmann is a regular and where individuals enjoy bizarre, liberating experiences shut off from the outside world. The aesthetics of the series continue to be influenced by techno.

African American producers were recreating the deindustrialized metropolis as a setting of futurist visions when club techno emerged in the 1980s Detroit. The futuristic 1984 tune Techno City by Cybotron was inspired by Fritz Lang’s Metropolis and Yellow Magic Orchestra’s Technopolis from Tokyo.

“I extrapolated the necessity of interfacing human spirituality into the cybernetic matrix between the brain, the soul, and the mechanisms of cyberspace,” claimed Cybotron’s Rik Davis (using the term “matrix” before the film existed).

The names of the characters in The Matrix (Neo, Trinity, and Morpheus) all sound like techno producer names (Function, DVS1, Cadency). Similarly, the film’s wardrobe resembles conventional Berlin techno clubwear. “When they enter the Matrix, they create their persona, which is how they see themselves,” explained Kym Barrett, who designed the characters’ PVC jackets, hefty boots, and tiny sunglasses (by Richard Walker).

UR aimed to use technology’s anonymity to de-program individuals from what they dubbed the “dominant mindbeam”: a false reality in which we’re conditioned to embrace an erroneous sense of who we are via mass media. On their 1998 album Interstellar Fugitives, UR sang, “Everything you see may not be real.”

“It could be a mirage,” says the narrator.

The Matrix relies on a similar separation between the apparent and actual worlds. Switch was originally going to be a trans character who was a woman in the matrix but a guy in the real world, according to co-creator Lilly Wachowski.

Many trans and queer individuals encounter this reality in underground party scenes, where the techno club provides a safe space to discover who they really are.

The most memorable scene in The Matrix Reloaded takes place during a basement party in Zion. Hundreds of sweaty humans dance to a techno music (Fluke’s Zion) mimed by drummers in a huge area lighted by naked flames.

Muted-tone tunics with shaved heads, beaded wrists, and swinging dreadlocks are in style. That scenario evokes the euphoric feeling of liberation one gets during an underground club night, when the outside world fades away.

It resembles The Matrix’s weird combination of the future and the old in electronica.

What’s the deal with techno? It’s synthetic electronic music with no recognizable qualities – no melody, harmony, or song structure — delivered in gloomy, featureless settings at its finest.

It may therefore provide a brief respite from history and identity, including race, gender, and sexual norms. Techno is tied in an empowering manner to queer countercultural movements in Berlin, thanks to clubs like Berghain and promoters like Gegen.

“Leave your digital surveillance device at home (or in the coat check),” said a recent Gegen party’s blurb. “Destroy your sense of self-worth.”

Simulacra and Simulation, by French thinker Jean Baudrillard, was one of three books the Wachowskis advised Keanu Reeves to study before filming The Matrix. It chuckles, “There is no more fiction.”

“[Science] fiction will never again be a desperate rehallucination of the past, but a mirror held toward the future.” Movies like The Matrix Resurrections, in this opinion, are futile efforts to rehash classic grounding myths for our rapidly crumbling reality.

But I believe that is too pessimistic. Gilles Deleuze used the word “fabulation” to describe certain post-realist movies.

Despite its blockbuster fireworks, The Matrix is a cinematic fabulation that taps into our deep, difficult-to-shake feeling of contemporary life’s unreality and invents new identities. Work, cities, social media, interiors, race, and gender in our postindustrial world might seem like a collective dream from which we wish to be jolted awake.

Techno clubs have such power for many people. In Neo’s words, “a world without rules and controls, without borders or boundaries.” “Anything is possible in this world.”

It reminds me of my friend’s first night at Berghain, a secret power plant turned techno club. A lady approached him at the first-floor bar and asked if he wanted some psilocybin mushrooms; he agreed, and she motioned him to follow her.

He spotted the tattoo on her rear shoulder as they moved around the back of the strobe-lit dancefloor, surrounded by dancing leather-clad bodies. It was just like the incident from The Matrix that prompted Thomas Anderson’s metamorphosis into Neo and his entry into a new, stranger world.

Thanks to Liam Cagney at The Guardian whose reporting provided the original basis for this story.