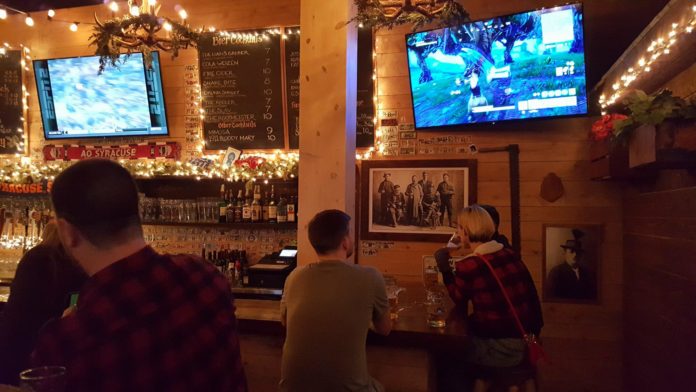 I was an early adopter of Fortnite. I remember seeing some comment on Reddit months ago mentioning it. I vaguely knew the name because of the obnoxious commercials that were all over Youtube, but I was sure that the game was some sort of Killing Floor-esque survival thing. Well, I guess maybe it is, but I’ve never played nor ever known anyone to play the PVE mode. The only part of Fortnite that matters to anyone is the ‘Battle Royale’ mode which has dominated the lives of college-aged men for the last two months. It’s crazy how much of a phenomena this thing has become—Barstool has even started capitalizing on it.

I started playing pretty early on in the beta for Battle Royale, but within a few weeks I was pretty much done with the game. I was a little burnt out, and the aiming really sucked. I came back to school after the holidays to find out that every single one of my close male friends had been psychologically sabotaged by the game—it was all anyone gave a shit about—the aiming had also been fixed. Despite the fact that I’m not so inclined to hop back into the game, it’s refreshing to see people in school playing anything other than FIFA which I absolutely cannot stand. Even though I like the game a good deal, I was approaching the point of intolerance until last night. Last night, something magical happened.

I was celebrating a friend’s birthday at Wolff’s Biergarten; a locale that specializes in serving very large quantities of imported beer and has free peanuts, when all of the sudden I noticed that the barback had whipped out an Xbox controller. I did not for a moment think that he was about to start playing Fortnite.

But he did. And damn, was it hype. All of the sudden every guy in the bar was crowding around the TV to the chagrin of the girls they were with. For the next two hours Wolff’s became a Fortnite bar—the game absolutely dominated the place.

Games at bars aren’t necessarily a new thing. I’ve been to a few so-called ‘Barcades.’ Those places mostly suck, however. It’s less fun than you’d think to play deep-cut retro games while drinking overpriced Lagunitas surrounded by hipsters and their disinterested dates. This was sort of a different experience. It’s such a gripping and exciting game, with such a potential for hype that nobody even seemed to care that only one person could play at a time. It’s also a nice looking enough game with easily parsed graphics—even if I didn’t know anything about the game I still think I’d be able to tell what was going on. That’s the problem that a lot of these games have when it comes to live spectating. I’ve seen people playing Super Smash Bros at bars, but have you ever seen two people who are actually good play each other? Unless you have a few dozen hours clocked on Melee you aren’t going to be able to parse out shit from shinola. And don’t get me started on ‘Barcraft.’ I can barely tell what’s going on in a Starcraft game when I focus almost to the point of aneurysm—you’re going to add in beer and loud nerds? Good luck with that one buddy. Fortnite is one of those rare games that actually works in a live, drunk setting, and that’s pretty special if you ask me.

Here’s an Instagram video from the night that doesn’t show much gameplay but at least conveys some of the hype.