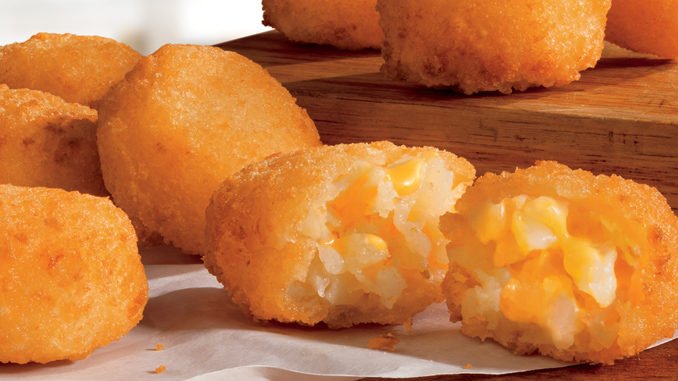 I can’t really say that I’m excited for the return of Cheesy Tots. In fact, I can’t say I even remember them having existed in the first place. I’ve been going to Burger King for pretty much my entire life—it was the fast food of choice when I was very young, and I practically lived off of it my sophomore year of college—yet I can’t say that I ever remember these little nuggets of cheese and tater having ever been there. Maybe it’s just that I wasn’t interested in them, or that they didn’t stand out to me like other classic BK menu offerings. Or here’s another idea—Cheesy Tots never existed in the first place. It’s all some sort of marketing ploy. I’ve asked each of my roommates and none of us can even vaguely remember the existence of such a product, which was apparently discontinued in 2009. We’re looking at a phony Mandela Effect situation here. Burger King is attempting to plant memories in your head and it’s working.

Aren’t you so excited for the triumphant return of the Cheesy Tot?

No, you’re not, because you never had them in the first place, and you probably never will because they look like little shit croquettes.

You know what they should have brought back for real though? Shake ’em Up Fries. I don’t even remember if these were any good, only that they were an absolute novelty of the highest order. I’m pretty sure they were basically normal fires in a foil bag that you were supposed to shake up with some prepackaged Cheeto dust. I think they might have been spicy or something too. I’m not sure. I just remember that I had them once or twice when I was a kid and that I thought they were super dank.

Or how about the sliders? Everyone likes sliders. There’s like zero White Castle’s anywhere and basically a trillion Burger Kings. You could totally corner the market on sliders.

Or maybe that weird omelette sandwich I’ve seen on a bunch of Buzzfeed lists. There’s gotta be something there, right? Something better than these abominations? What position do they even play in my meal? Do you think I’m going to just not get fries and opt for the tots instead? Because that’s not going to happen, I basically go to BK for the fries alone. Maybe you think I’ll get them as an auxiliary potato product to supplement my fries. Wrong again.

I’ll be frank: I cannot possibly imagine a situation in which I would be at all inclined to order these gooey shits. I don’t want savory munchkins. I don’t want them at all. Also hot take: tater tots are the absolute worst form of potato. They’re so shitty tasting that I can’t even believe that anyone actually likes them. All they are is really salty potatoes that are worse than fries in every single way. I’m willing to scrap over this. Everyone is always like ‘oh man, Tater tots, so dank,’ and I’m sitting here like ‘these are just terrible.’